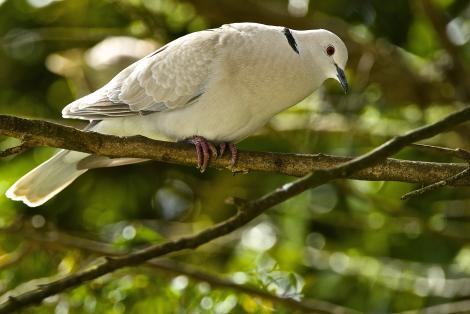 The Barbary dove is the domesticated form of the African collared dove (Streptopelia roseogrisea), a native of the Sahel, Ethiopia and the Arabian Peninsula. It has been domesticated for many hundreds of years, something that is reflected in its confiding and gentle nature. Because of its long dependence on people, it seems less able than other dove species to survive for long in the wild.

The Barbary dove is pale, fallow brown above and creamy buff to peach pink below. The head is sometimes paler than the body, with a narrow crescent of black feathers extending from side to side across the back of the neck. This half-collar is fringed with white in adult males, less so in females. Otherwise, the sexes are alike. The primary and secondary wing feathers are grey-brown, with the primaries having pale edges to them, accentuating their outline. The upper wing coverts, tertial and scapular feathers are sandy brown, while the underwing coverts are off-white. The rump and upper tail coverts are pale brown with a faint grey wash; undertail coverts white. The greyish brown central tail feathers contrast with the outer tail feathers, which are darker with prominent white tips, extending up to half the length of the feather. Immature birds are paler than adults, with distinct pale brown edges to the upper wing coverts, tertials and scapulars; the collar is either absent or only faintly defined. In adults, the iris is red, in contrast to the pale yellow-brown of immature birds. Leg colour also differs, being deep pink in adults, and grey-brown in immatures. The bill is dark grey at all ages.

Call: a soft, melodious, repeated two-note phrase, coo crrooo, with a brief pause between the two syllables; also has a heh-heh-heh-heh challenge or greeting call, given when approaching another individual.

Similar species: spotted dove is larger, darker grey-brown above, pink-brown below, with a white-spotted black patch on the sides and back of the neck rather than a black half-collar.

Introduced to Nelson in 1867 but did not establish. Released later (unsuccessfully) in Canterbury and Dunedin. An introduction around Masterton, sometime before 1971, led to the establishment of a feral breeding population there in the early 1970s, but none was recorded from the region during the 1999-2000 Bird Atlas survey, suggesting that this introduction also failed. The populations established in Northland (Kerikeri, Whangarei), around Auckland, central Waikato, and in Hawkes Bay, centred on Hastings, are assumed to be derived from birds that escaped or were released from local aviaries. This is continuing, with Barbary doves occasionally reported from New Plymouth, Wanganui, Horowhenua, Wellington, Blenheim, Christchurch, and Dunedin.

An introduced species whose small numbers, sparse distribution, and apparently limited ability to persist in the wild, means that it likely has negligible ecological and economic impacts at present.

The nest is a loose platform of sticks, placed in a tree, hedge, or on a suitable ledge in an outbuilding. Both sexes build the nest, collecting sticks and twigs from the ground nearby. As in other dove species, Barbary doves almost invariably lay two oval white eggs, 1-2 days apart. Chicks hatch after about 14 days incubation. Both sexes incubate and brood the young chicks for the first few days after hatching, the male doing so mostly during the middle of the day; the female overnight. Chicks are fed initially on a milky secretion from the adult’s crop, often referred to as ‘dove’s milk’. Once their feathers begin to grow, around day 5, the chicks are brooded less often and fed regurgitated seeds.

The Barbary dove is a tame and confiding species, gregarious outside the breeding season, often associating with spotted doves, where present. During the breeding season, males are territorial and advertise their presence with a repeated coo crrroo call, given for extended periods of time from a conspicuous perch. Males also have a display flight, flying steeply upwards while clapping their wings, then gliding back to a perch with wings and tail stiffly spread. Clashes over territory can occur, with both birds using their wings alternately to beat each other. Males court females by giving the bow-coo display. In this, the male stretches up, filling its anterior air sacs, then bows and calls coo crrroo; the more intense the display, the more accentuated the second syllable of the call. Both sexes call, but females’ calls are usually quieter with more of a trill coo crrroo.

Birds arriving at a perch supporting other doves often give a rapid heh-heh-heh-heh-heh call that some people liken to a laugh. This seems to be a greeting call. If the arriving bird is a male and the one already on the perch a female, the incoming bird starts displaying with the bow-coo display.

Barbary doves feed on the ground on the seeds of grasses, cereal crops and herbs. Birds will occasionally stretch up to peck seed from inflorescences close to the ground.

A medium-sized creamy grey-brown dove with a black half-collar on the back of the neck bordered with white above. The bill is grey-black, eyes red and legs crimson.