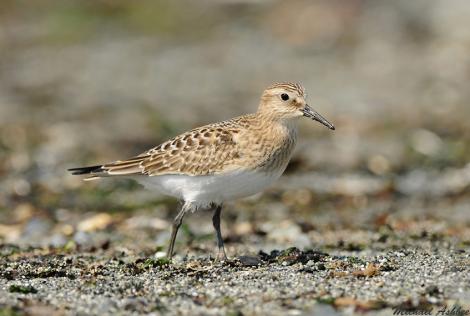 Mainly a native of the Americas, Baird’s sandpiper has occurred in New Zealand on a few occasions as a rare visitor. It is a small, rather plain wader, even in breeding plumage, and closely resembles white-rumped sandpiper, with which it forms a ‘species pair’.

Baird’s sandpiper is a small wader, larger than a stint but smaller than a sharp-tailed sandpiper. It is rather plain in all plumages. In non-breeding plumage, it is grey or brownish-grey above, the mantle and scapular feathers showing dark central streaks along the feather vane, and pale fringes, giving a slightly scaly appearance. The underparts are white, with variable amounts of streaking from the throat to the upper breast, but not extending along the flanks. The supercilium is rather indistinct. The bill is straight or slightly down-curved, it and the legs are black. In flight, the upper tail has a dark central stripe and very small white patches at the sides. There is a weak white wingbar. In breeding plumage, there are a variable number of mantle feathers with dark-brown to blackish centres fringed with buff, reportedly fading to dull black as the season progresses. Juvenile birds, like most small sandpipers, show a far stronger pattern to the upperparts than non-breeding adults, and a richer, buff-washed pattern of streaking on the breast, ending abruptly almost in the manner of a pectoral sandpiper.

Voice: calls away from breeding locations are typically short, and relatively low-pitched in comparison with the high zeet typical of the similar white-rumped sandpiper.

Similar species: red-necked stint is smaller, with a proportionately shorter bill. The white-rumped sandpiper is very similar, differing only in having streaking on the flanks, and the diagnostic white rump visible in flight. Pectoral sandpiper is larger with yellowish legs.

Baird’s sandpiper breeds across Arctic Canada and Alaska, extending to north-western Greenland and eastern Siberia. It is a long-distance migrant to western and southern South America, with birds regularly reaching the Falkland Islands, and recorded on the Antarctic Peninsula and South Georgia.  Baird’s sandpiper also occurs as a vagrant in Europe and Australia. There are seven accepted New Zealand records.

The total population of Baird’s sandpiper is about 300,000 individuals and apparently stable.

Baird’s sandpipers migrate mainly through central North America and are found rather less frequently along the coast. They favour inland waters as a rule, and show a marked preference for drier locations; they are often recorded in habitats such as short grassland. Baird’s sandpipers are noted for occasionally being found at high elevation on migration, where they have been found feeding on snowbanks. While this pattern is repeated in their non-breeding grounds, birds may also typically be found in small flocks on rocky or sandy coasts, often with white-rumped sandpipers and other species. All New Zealand records are from estuarine or coastal areas.

Baird’s sandpipers breed from eastern Siberia, across North America to north-western Greenland. The birds select lowland to upland tundra in the high Arctic, mainly in drier areas with sparse vegetation. Both members of a pair share incubation, though typically the female will desert while the chicks are still very small.

A small wader which in non-breeding plumage is grey or brownish-grey above with pale fringed mantle and scapular feathers with dark central streaks feathers, white underparts with variable amounts of streaking from the throat to the upper breast, and a faint supercilium. The black bill is straight to slightly decurved and the legs are black.

Display and anxiety calls near nest