Geographical variation: Eight subspecies described, the subspecies of the sole New Zealand bird is not known. 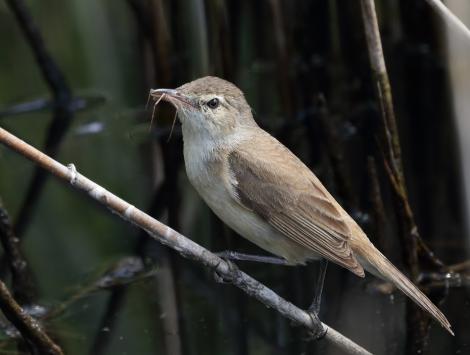 Reed warblers are a group of Old World warblers that typically (but not without exception) inhabit dense habitats associated with water, such as reeds, papyrus and bulrushes. The Australian reed warbler was split about from the very similar clamorous reed warbler (Acrocephalus stentoreus) in the late 1990s, though this split is not universally accepted. It is a typical large Acrocephalus warbler, which as a group have plumage of various shades of brown and beige, a pale eyebrow and a dark stripe through the eye. The Australian reed warbler is the only member of the Acrocephalus genus recorded in New Zealand.

The Australian reed warbler is medium-sized songbird that is plain mid olive-brown above and pale beige below, with a pale beige eyebrow and a faint brown stripe through the eye. The bill is thrush-like in structure and dark brown above paler below; the legs are very dark grey/brown.

Song: a varied outpouring of a mixture of guttural and liquid notes with some phrases repeated, e.g. chug chug cherty cherty cherty swee chug chug etc., a little like an improvising jazz musician. Calls include an unmusical ‘tick’ and scolding notes.

Similar species: there are several Acrocephalus warblers in the Australasian/Pacific region, including the migratory oriental reed warbler (A. orientalis), which is a rare visitor to northern Australia. This species has darker brown streaks on the upper breast/throat, darker lores and a shorter beak. Its song is deeper-pitched, more mechanical and lacks the sweeter phrases of Australian reed warbler. Fernbirds inhabit the same wetland vegetation types that reed warblers may occur in, but are darker, more streaked and much less vocal.

Australian reed warblers of several races are found in Australia, Papua New Guinea, Solomon Islands, Timor Leste, the Philippines, and islands near and within these countries. There is partial migration northwards out of the southern parts of Australia to escape winter there. They inhabit edges of waterbodies with a dense growth of vegetation such as reeds, rushes, sedges or trees/bushes.

One record: a bird inhabited raupo beds and adjacent vegetation at St Anne’s Lagoon (north of Cheviot) for about two weeks in November 2004.

The Australian reed warbler is a skulker, mostly staying out of sight in dense vegetation. Their presence is usually given away by song or calls coming from deep in their habitat. They sometimes perch high on a reed or bulrush stem, and are normally seen singly or as a pair.

Handbook of the Birds of the World Alive

A medium-sized songbird that is plain mid olive-brown above and pale beige below, with a pale beige eyebrow and a faint brown stripe through the eye. The bill is thrush-like in structure and dark brown above paler below; the legs are very dark grey/brown.