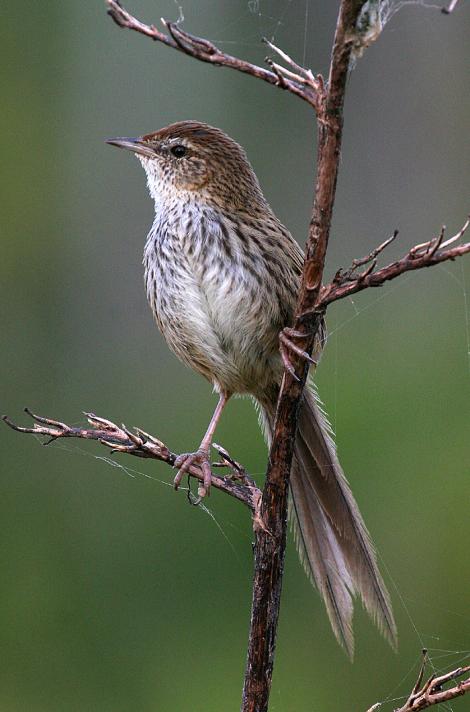 More often heard than seen, fernbirds are skulking sparrow-sized, well-camouflaged birds that on the three main islands are found mainly in dense, low wetland vegetation. They have disappeared from large areas of New Zealand, including Wairarapa, Wellington and Canterbury, but remain common on the West Coast and in pockets of suitable habitat from Northland to Stewart Island. Fernbirds occupy drier shrubland and tussock habitat at a few sites, including in the Far North and on some islands.

The only other member of this genus in New Zealand was the extinct Chatham Island fernbird P. rufescens. Both were previously placed in the endemic genus Bowdleria; however, genetic analyses revealed them to be closely related to the spinifexbird Poodytes carteri (from Australia) and two grassbird species from Australia and New Guinea.

Small, long-tailed songbirds that are predominantly streaked brown above and pale below. The mainland subspecies have a chestnut cap and a prominent pale superciliary stripe. The loosely-barbed plain brown tail feathers have a distinctive tattered appearance.

Voice: a characteristic ‘u-tick’ given as a duet by members of a pair.

Similar species: the only other skulking passerine found in dense vegetation is the introduced dunnock, which is smaller, and has darker underparts and a shorter tail.

Widely if patchily distributed in dense wetland vegetation throughout New Zealand; absent from the southern North Island (apart from Waikanae Estuary) and Canterbury. Locally common in dry shrubland near North Cape, tussock-covered frost flats up to 1000 m altitude in Tongariro and Kahurangi National Parks, pakihi vegetation on the West Coast, and reedbeds growing in saltmarshes in the West Coast, Otago and Southland. Occurs in dense kiekie on the Open Bay Islands (off Haast), and in tussock grassland and under low tree-daisy (Olearia) forest and kokomuka (Hebe elliptica) shrubland on muttonbird islands and the Snares Islands. Common on Great Barrier Island, formerly present on Great King Island (Three Kings Islands) and Aldermen Islands, introduced to Tiritiri Matangi Island; otherwise absent from islands off North Island, in Marlborough Sounds and in Fiordland.

Many local populations have been lost due to drainage of wetlands and conversion to pasture, combined with predation by introduced mammals. Several populations on muttonbird islands were extirpated by introduced ship rats (Solomon, Pukeweka and Big South Cape Islands) and weka (Kundy and Jacky Lee Islands).

Spring and summer breeding. A deep, woven, feather-lined cup of fine grass or sedge leaves in dense vegetation, usually less than 1 metre above ground or water. Clutch size typically 2 on islands and 3-4 on mainland. Both members of the pair incubate the eggs and care for the young.

Fernbirds are poor fliers; they typically scramble through dense vegetation, though occasionally fly short distances with their tail hanging down, just above the vegetation. Although difficult to observe due to the dense habitat they occupy, fernbirds often approach observers closely, especially in response to mimicked calls. Pairs keep in contact with duet calls. On southern islands, fernbirds forage frequently among leaf litter, holding up leaves with one foot while inspecting the underside, and they occasionally enter seabird burrows. They also catch blowflies on sleeping sea lions (Snares Islands). Fernbirds have a gamey smell which makes them irresistible to dogs trained for game hunting or as conservation dogs. Oldest known bird 6.5 years. No banded birds have moved more than 800 m, but fernbirds occasionally turn up at sites tens of kilometres from known populations.

Insects (especially caterpillars, flies, beetles and moths), spiders and other small invertebrates. Occasionally seeds and fruit; one record of a skink.

A small long-tailed songbird that is predominantly streaked brown above and pale below, with loosely-barbed plain brown tail feathers that give birds a distinctive tattered appearance, a pointed greyish-black bill and long pinkish-red legs. The mainland subspecies have a chestnut cap and a prominent pale superciliary stripe.

Calls and song from 2 South Island fernbirds (greenfinches in background)