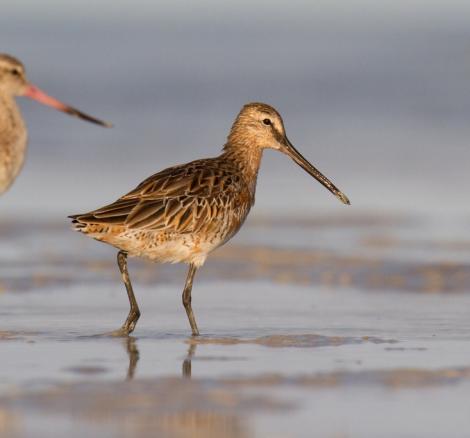 The dowitchers are three long-billed members of the sandpiper family. They are intermediate in size between the Calidris sandpipers and the godwits. They breed on lake shores, river deltas, wet grasslands and bogs in northern Canada, Alaska and Siberia. The Asiatic dowitcher is the largest of the three species and the only one which migrates along the East Asian-Australasian Flyway, wintering mainly in equatorial regions but occasionally reaching New Zealand as a rare vagrant.

The Asiatic dowitcher is a medium-large wader with a long, straight, blunt-tipped, dark bill. It has medium-length legs and long wings. In both breeding plumage (reddish head, breast and back; white undersides) and winter plumage (mottled grey-brown head, breast and back; white undersides) it looks similar to a bar-tailed godwit, with which it is very easily confused. The key identification points are (1) smaller size (about 85% the length and 60% the weight of a male bar-tailed godwit); and (2) the distinctive bill which is straight with an even thickness and consistent black colour through its entire length - quite different to the slightly upturned, bi-coloured (pink base, black tip) tapering bill of a bar-tailed godwit.

Voice: generally silent when feeding, but on the wing will occasionally make a soft flight call variously described as eouw, kiaow or kiow.

Similar species: bar-tailed godwit is slightly larger, with a slimmer, upturned bill that is pink at the base. Short-billed dowitcher and long-billed dowitcher (neither of which have been recorded from New Zealand) are smaller, with greenish legs.

Asiatic dowitchers breed in scattered pockets in the steppe and forest steppe regions of Siberia, Mongolia and north-east China. On migration they occur in small numbers in East Asia, the Indian sub-continent, the islands of South East Asia, northern Australia and New Guinea. In the non-breeding season they prefer coastal habitats, particularly inter-tidal mudflats. The bulk of the wintering population is concentrated in Sumatra and in Java, Indonesia. The global population is estimated at 23,000 birds but recent discoveries of large flocks in Indonesia indicate the population is likely >50,000.

The Asiatic dowitcher has been recorded six times in New Zealand, with sight records from the Avon-Heathcote estuary, Christchurch (August-September 1985); Firth of Thames (February-May 1987); Farewell Spit (January 1988); Maketu estuary (November 1998), Ohiwa Harbour (October-December 2002), and Motueka Sandspit (December 2016 to February 2017). All records in New Zealand have been of single birds on estuaries, usually associating with bar-tailed godwits.

Asiatic dowitchers are gregarious in the non-breeding season, usually feeding and roosting amongst other wader species, especially godwits. They have a distinctive, vigorous feeding technique, involving repeated deep vertical probes by the bill as the bird moves forward. It is likened to a “sewing-machine” action and readily brings attention to a dowitcher amongst a flock of other waders.

Range of songs and calls