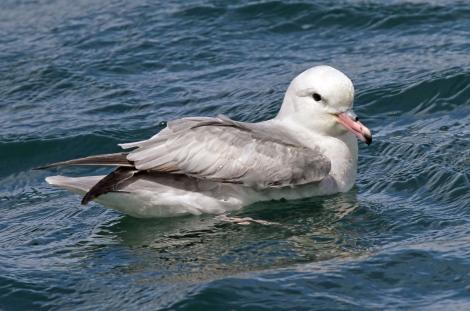 The Antarctic fulmar is a medium-sized fulmarine petrel with a rather gull-like appearance. However, its flight is more like that of an albatross, flapping, gliding and soaring over the waves on long stiff wings. It is a circumpolar colonial breeder on the coasts of Antarctica and adjacent glaciated islands, including Balleny, South Sandwich, South Orkney, South Shetland and Bouvetøya. Antarctic fulmars nest on cliff ledges up to 200 m above the sea; along with the Cape petrel and Antarctic petrel (which often nest nearby), it is among the few petrel species that are true cliff-nesters. Antarctic fulmars range across the Southern Ocean. In summer it is one of the commonest birds of circumpolar pack ice. Its winter range extends well north of Antarctica into subtropical seas, including New Zealand waters, and it sometimes reaches tropical waters off the coast of South America.

The Antarctic fulmar has a white head, pale silver-grey neck and mantle grading to darker grey on the upperwings and back, and black wing tips with rectangular skua-like white flashes towards the tips. The underwings and tail are white, and the tail fans out to a wedge during flight. The pink bill has a black hooked tip with bluish nasal tubes on top. The eyes are dark and the feet pinkish. The wings are quite broad and rounded, with a combined span of 110-120 cm.

Voice: Antarctic fulmars are usually silent at sea. They make loud cackling or rattling calls and a repeated kew-kew-kew call at the nest and in feeding flocks; their calls are similar to those of the Cape petrel. Chicks make begging che-che calls.

Similar species: the Antarctic fulmar looks similar to the northern fulmar of the Northern Hemisphere, which has been recorded once in New Zealand (and the Southern Hemisphere). Antarctic fulmar differs in always being pale (no dark morph), and having a predominantly pink bill with a black tip. It is distinguished from white-headed petrel by its paler bill and white underwings.

The Antarctic fulmar is a circumpolar colonial breeder along the coast of Antarctica and adjacent glaciated islands, including Balleny, South Sandwich, South Orkney, South Shetland, and Bouvetøya. During the breeding season, fulmars forage in pack ice around Antarctica and breeding islands. They are highly nomadic outside the breeding season, moving north away from the pack ice, to open water off the coasts of South Africa, Australia and New Zealand, and South America to central Chile and southern Brazil. The Antarctic fulmar is a regular winter straggler to New Zealand seas, mainly during May-December. Small numbers are beach-wrecked on the New Zealand mainland most years, rising to over 600 in 1975. They have been recorded off the North Island in seas off Auckland and the Bay of Plenty, but are most regularly reported at sea off Kaikoura Peninsula, where an exceptional 24 birds were seen together in 2005.

The total global population of Antarctic fulmars is estimated at 4 million birds.

The Antarctic fulmar has a very large range and a large, stable population, and is classified as Least Concern by the IUCN Red List. Extreme weather kills 40% of eggs and 25% of chicks. Some local populations may be affected by the effects of climate change in future. Antarctic birds seem to be breeding later in response to a reduction in the extent of sea-ice cover, causing decreases in prey species in some areas, or the increasing length of the sea-ice season, which delays access to breeding grounds.

Antarctic fulmars return to their colonial breeding grounds from October. Paired birds tend to stay together each season, and are monogamous with shared incubation and chick care. Antarctic fulmars have difficulty taking off from land, preferring to build nests on rock ledges and in cavities on cliffs and steep rocky slopes. The nest is a gravel-lined scrape on a ledge or crevice with shelter from the wind. The single large (76 x 50 mm) white egg is laid in December. Incubation takes 46-47 days, and the chick is brooded and guarded for 14-20 days after hatching. Chicks fledge in March, 50-52 days after hatching.

Antarctic fulmars are highly sociable birds, and often feed and rest in large flocks. Large congregations of birds, often mixed with other seabirds, such as Cape petrels, gather around food concentrations at sea. They are noisy and aggressive while feeding in large congregations. Breeding is highly colonial. During courtship displays paired birds touch bills, wave heads, and preen together, while calling loudly. Skuas harass and prey on weak chicks. Adults defend the nest from intruder birds by lunging forward with wide open bill. Adults and chicks sometimes squirt foul-smelling stomach oils at intruders (fulmars, skuas or humans) when alarmed.

A medium-sized fulmarine petrel with a white head, pale silver-grey neck and mantle grading to darker grey on the upperwings and back, and black wing tips with rectangular skua-like white flashes towards the tips. The underwings and tail are white, the pink bill has a black hooked tip and bluish nasal tubes, the eyes are dark and the feet are pinkish.

Adults and young at nest