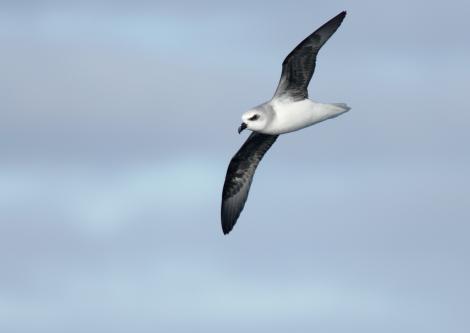 The white-headed petrel is a grey-and-white summer-nesting seabird that breeds on remote islands in the Southern Ocean. It is the largest (by weight) of the 34 species of Pterodroma petrels, a group of seabirds also known as gadfly petrels because of their high soaring flight at sea. White-headed petrels are similar in size to a large gull but have the long narrow wings typical of their family. These allow the birds to fly swiftly to distant feeding grounds, perhaps hundreds or thousands of kilometres from land, where they feed mainly on krill and squid. The white-headed petrel is strictly nocturnal at the breeding grounds, probably a response to the presence of predatory subantarctic skuas that hunt seabirds on these southern islands. The general biology of white-headed petrels is still quite poorly known.

The white-headed petrel is a large grey-and-white petrel (tube-nosed seabird) with a pale white head, prominent dark eye patch, long narrow wings and long pointed tail. The upper surface is pale grey contrasting with darker grey on the upperwings and rump. The underside is mostly white but with contrasting dark-grey underwings. From a distance these birds can appear all white with dark grey underwings. In the hand, the stout black bill (38mm long, 18 mm deep) has a large sharp hook to seize prey. The tubed nostrils (to excrete excess salt) are prominent. The legs are pink/white with black patches on the toes.

Voice: the calls of white-headed petrels are similar to those of the closely related grey-faced petrel. The calls are mainly higher pitched shrill whistles ti-ti-ti or wik-wik-wik and lower pitched moans ooo-er  and or-wik sounds.

Similar species: soft-plumaged petrels are similar in shape and plumage-markings, but are smaller and appear hooded, with dusky –grey on the head and upper breast. Grey petrel is larger and also has dark underwings, but is darker on the head, has a pale green bill, and is a different shape, with longer neck and smaller head. Pale morph Kermadec petrels are smaller, do not have a dark eye patch, are darker on the back and tail, and have prominent white flashes on the outer underwing, and corresponding pale primary shafts showing above.

The white-headed petrel breeds in colonies on subantarctic Kerguelen, Crozet, Macquarie, Auckland and Antipodes Islands. They may also breed on Marion and Prince Edward Islands and on stacks off Campbell Island. They nest in burrows in peaty soils under tussocks, ferns, low shrubs or in rata forest (Auckland Islands only). The burrows are normally dug in drier soils on well drained slopes but may also be on plateaux or above coastal cliffs. At sea, white-headed petrels forage mainly over cold water between the subantarctic and Antarctic convergence zones, but may move northwards in the non-breeding season during the annual feather moult. They can be seen at sea throughout the Southern Ocean surrounding Antarctica.

The only accurate estimate of population size for this species was from Macquarie Island (7850 pairs in 1984). Best guesses suggest that 100,000 pairs may breed at both Auckland and Antipodes Islands. Less than 50,000 pairs are thought to occur at the remaining breeding islands, suggesting a world population of about 600,000 birds.

The major threat to white-headed petrels, as it is for all gadfly petrels, is the introduction of mammalian predators on their breeding grounds. The colonies on main Auckland Island have been lost to feral cats and pigs. The species probably also bred on Campbell Island in the past before Norway rats and feral cats reached the island.  On Macquarie Island, weka, rabbits, ship rats and feral cats greatly reduced the population. Both Campbell and Macquarie Islands have now been cleared of introduced pests.  On Kerguelen Island, the colonies are largely present on the pest- free islands in the group. Mice are present on Antipodes Island but their effect on petrels is unknown. However mice on Gough Island are having a major impact on seabirds so there may be undetected problems on Antipodes Island. Removing pests from main Auckland and Antipodes Islands would benefit this species in the long term. The risk to white-headed petrels from fisheries impacts appears to be minimal.

The white-headed petrel breeding season is broadly August to June, with the single large (72 x 51 mm) white egg laid in late November or December and hatched in January-February. The egg is laid in a well-lined nest at the back of a long burrow dug into peaty soil. The birds can breed annually although some birds skip a season if successful in rearing the single chick. Both birds share incubation shifts and feeding of their chick. Incubation takes 55-60 days. The chick is independent of the parents when it fledges at about 102 days old.

White-headed petrels are nocturnally active at their breeding grounds. They are very wary upon landing from flight and will rapidly hide under dense vegetation or quickly enter their burrows. Their activity ashore is more pronounced on dark nights (no moon) or during periods of wet, stormy weather, especially on foggy nights. At sea the birds are mostly solitary.  Most calls are given in flight but the birds do also call from within their burrows. They have a loud screaming alarm call if threatened. The species almost never calls on the surface at night. This may be to avoid detection from night-hunting subantarctic skuas, which are the main predators of white-headed petrels. Sex differences in calls have not been described but are likely.

The diet of white-headed petrels is poorly known. They have been recorded feeding on crustaceans (amphipods and shrimps), squid and lantern fishes. There is no information yet on whether the feeding is done mainly by day or at night.

Calls from adults on and over breeding colony