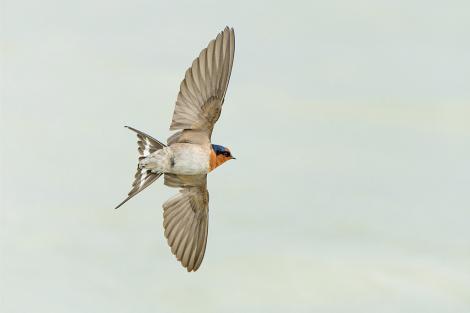 Welcome swallows are small fast-flying birds found in open country particularly around lakes, coasts, riverbeds and ponds. Their flight is circular and darting in style, and they may be seen singly, in pairs or in flocks. Flocks often perch en masse, lined up on fences or power lines. They were named ‘welcome swallows’ because they appeared in southern Australia as a herald of spring. Due to their elegant shape and flight, and their preference for nesting around buildings, swallows are noticed and appreciated more than most other small birds.

Welcome swallows are small, elegant birds with blunt heads, a deeply-forked tail and long pointed wings. Adults have rufous on the forehead, neck and breast and to a lesser degree (and paler) on the flanks. The bill is short, broad and black, and they have a black eye stripe. The back and upperwings are blue-black. The tail is dark with white spots towards the ends of the feathers that form a row of dots when the tail is spread in flight. The under parts are pale buff. The sexes differ only in that the females’ tail streamers are slightly shorter and the tail spots smaller. Juveniles are also similar but have darker heads and an overall duller colouring.

Voice: fantail-like twittering, chattering and chirrups. Calls are generally quiet and do not carry far.

Similar species: two martins and two swifts occur in New Zealand as rare vagrants. The tree martin and fairy martin are slightly smaller than welcome swallows and have dull white rumps and shorter, squarer tails. Fairy martin has rufous over the crown and nape (which are blue-black in welcome swallow), and tree martin has rufous colouration confined to a small spot above the bill. Fork-tailed swift and white-throated needletail are larger, longer-winged and darker underneath than welcome swallows. They are rarely seen perched. Both the swifts have pale markings on their back or rump, unlike the uniformly dark swallow.

Welcome swallows occur throughout New Zealand, though are rare or absent in Fiordland. They occur in most habitats other than dense forest or alpine areas. Swallows are most often seen close to wetlands or the coast. In colder areas they may migrate seasonally, and flocks travel long distances to reach good food sources. Welcome swallows are resident on the Chatham and Kermadec Islands and have been recorded as vagrants many times at the Snares and Auckland Islands, and twice at Campbell Island.

A self-introduced species from Australia, welcome swallows were rare vagrants before the late 1950s and increased greatly through the 1960s and 1970s particularly in the North Island. Early records included Northland (1920), Auckland Islands (1943), Awhitu Peninsula (1944), Campbell Island (1946), Stewart Island (1953) and Farewell Spit (1955). Their arrival was closely monitored by bird-watchers, and resulted in perhaps the most amusing title ever penned for a New Zealand bird publication – Barrie Heather’s 1956 short note ‘Welcome swallow at Farewell Spit’.

Welcome swallows first bred in New Zealand at Awanui, Northland in 1958. By 1965 they were common throughout Northland, spreading elsewhere in the North Island, and were breeding in the South Island.

The clearing of land and addition of built structures by European settlement in Australasia has been of benefit to welcome swallows and they are now an abundant native species.

Welcome Swallows can raise three broods between August and February. They build distinctive cup-shaped nests on ledges or attached to vertical supports usually on manmade structures such as houses, bridges and culverts, out of direct sunlight. Mud and grasses are used to build the nest from the base upwards and then it is lined with fine grasses and feathers. The 3-5 pinkish eggs with brown speckles are laid at 24-48 hour intervals and incubated by the female for 15 days. The nestlings are fed by both parents and fledge at 18 days old. Nestling wings grow at a constant rate regardless of fluctuations in food supply. Nests take 6-24 days to build, and are often re-used within and between breeding seasons.

Welcome swallows are gregarious. They often nest as pairs, but other birds may help with caring for the young. When not breeding they roost together in large numbers under bridges or in raupo swamps and they will mob predatory birds. In winter, flocks travel large distances to find reliable food sources, some Australian birds even going as far as Norfolk Island.

Swallows forage aerially for small invertebrates. They occasionally perch on plants to take insects or sweep them up from the water. Swallows often drink while flying, scooping water from the surface of a lake or pond.

Robertson, H.; Heather, B. 2005. The hand guide to the birds of New Zealand. Penguin, Auckland.

A small bird with rufous on the forehead, neck, breast and flanks, a black eye stripe, a short broad black bill, blue-black back and upperwings, pale buff underparts, long dark tail with white spots towards the ends of the feathers, and a deeply-forked tail and long pointed wings. Juveniles are similar but with duller colouring and a darker head.

Calls of 3 birds in flight