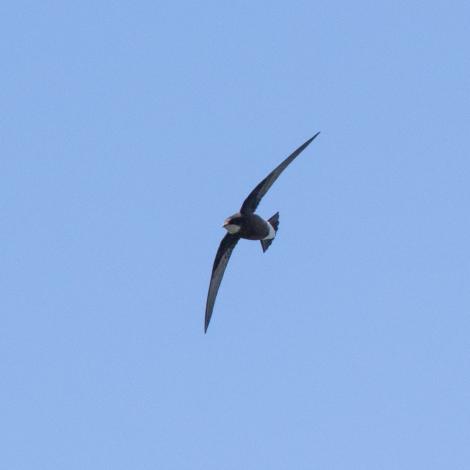 Needletails are fast-flying birds that spend most of the year on the wing, only landing during the breeding season and when roosting. Their legs are so short and their wings so long that they are unable to take off if they are placed on the ground. They have large mouths that are used to feed on ‘aerial plankton’.

A dark-plumaged, cigar-shaped bird with a distinctive white throat, a white horseshoe mark under the tail, and a pale greyish patch in the centre of the back. The sharp ‘needle’ projections on the tail feathers can usually only be seen when the bird is in the hand.

Similar species: All potential confusion species are smaller than the white-throated needletail. Welcome swallow has a deeply forked tail, glossy blue-black upper parts, red face and pale greyish underparts. Fork-tailed swift is all dark except for a pale throat and a white band across the rump and has a deeply forked tail. Fairy and tree martins have more rounded wings, white rump, pale underparts and almost square tail.

White-throated needletails have been recorded from both main islands as well as the Snares Islands and Chatham Island. Most records are of single birds, but there are occasional ‘invasions’ when flocks of up to ‘hundreds’ may occur (McCaskill 1943). In New Zealand they are most often reported over islands and headlands.

No estimate. The nominate race caudacutus breeds in Siberia and northern China and Japan and spends the non-breeding season in New Guinea and the eastern half of Australia.

None known, however it is likely that populations of prey species have been and are being affected by pesticide use and air pollution, which remain serious problems in much of East Asia, as well as global climate change. A comparison of data from the two bird Atlas projects in Australia (1977-1981 and 1998-2002) indicates a decline in distribution and reporting rates.

2 to 7 eggs are laid in a scrape or natural depression in a tree hollow.

Most white-throated needletails occur in Australia between October and April, which is when most New Zealand records have occurred. Needletails are gregarious and spend most of the time flying, however they will roost perched on trees. They are reported to be the fastest flying bird, travelling at 170 kph – one source even suggesting that they can attain 349 kph in straight flight!

Insectivorous, probably taking a wide range of species carried aloft as ‘aerial plankton’. Foraging birds may reach heights in excess of 1000 m and often forage on the edge of low pressure systems.

Chantler, P.; Driessens, G. 1995. Swifts - a guide to the swifts and treeswifts of the world. Pica Press, Sussex.

Heather, B.; Robertson, H. 1996. The field guide to the birds of New Zealand. Viking, Auckland.

A dark-plumaged cigar-shaped bird with a distinctive white throat, a white horseshoe mark under the tail, and a pale greyish patch in the centre of the back. The sharp ‘needle’ projections on the tail feathers can usually only be seen when the bird is in the hand.

Injured adult held in the hand, anxiety or distress calls