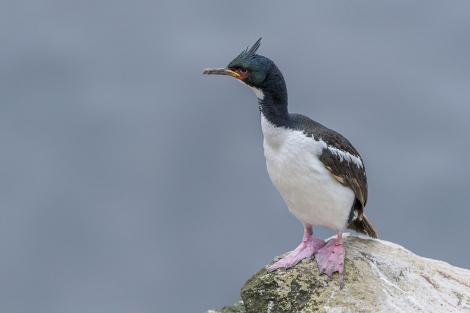 The Auckland Island shag is one of six pink-footed shag species endemic to New Zealand. Found only in the Auckland Islands, it is the only resident shag there, occurring on Auckland, Adams, Enderby, Disappointment, Ewing, Dundas and Green Islands. The Auckland Islands (Motu Maha or Maungahuka) are part of the New Zealand Subantarctic Islands World Heritage Area. The islands are the largest of New Zealand's subantarctic islands, with a combined land area of 625 km2. They lie 465 km south of Bluff, between latitudes 50° 30' and 50° 55' S and longitudes 165° 50' and 166° 20' E.

The Auckland Island shag is a medium-sized, black-and-white marine shag. The black plumage on the head and neck has a metallic green and blue sheen in sunlight, contrasting with the white throat and underparts, and pale pink feet. During the breeding season Auckland Island shags have a tall, black, recurved head crest, magenta-pink eye ring, red facial skin, and red-orange to purple throat pouch. It lacks the caruncles above the bill base that are found in the three northernmost pink-footed shag species, but does have orange-yellow rough skin at the bill base and along the gape. The iris is light brown. The long bill has a dark ridge, grading from brown to pale pink at the hooked tip. White patches on upper wings vary from prominent to absent; some males have a white patch on the back. Non-breeding adults lack crests, and the black plumage fades to brown. Juveniles are distinguished by brown facial skin and upperparts. Sexes are alike in plumage but males are slightly larger than females and differ in their calls and courtship behaviour.

Voice: during courtship displays the male barks and makes ticking sounds while the female purrs or puffs softly. They are silent elsewhere.

Auckland Island shags are restricted to the Auckland Islands and shallow nearby waters. They mainly inhabit the sheltered harbours and inlets of the eastern and southern coasts, plus Port Ross in the north. Colonies are known from Auckland, Enderby, Rose, Ewing and Adams Islands, and Sugar Loaf Rocks (near Disappointment Island). They forage up to 24 km offshore. The only bird recorded away from the Auckland Islands arrived as a juvenile on the Snares Islands, 280 km to the north, in 1994 and was resident there for 8 years, during which time it gained adult plumage.

This species is classified as Vulnerable by the IUCN because it has a very small range and is susceptible to stochastic events and human impacts. Population trends are unknown, but the population is assumed to be stable following the elimination of most but not all feral mammalian predators at the islands. The Department of Conservation lists it as Nationally Vulnerable B (1/1). The subantarctic skua and southern black-backed gull both prey on shag eggs and chicks. The weather poses a greater threat, with storms during chick rearing causing the direct loss of chicks from exposed nests, or chick starvation resulting from interrupted adult foraging. On the main Auckland Island, the major threat is from feral pigs which destroy any shag colony they can reach. As a result, most colonies are now in inaccessible places. Feral cats are also potential predators on Auckland Island. On Enderby Island, feral cattle (since removed) eliminated a tussock species used elsewhere as a favoured nesting material.

Auckland Island shags breed from November to February in colonies on cliff tops, rock ledges and alcoves, often under an overhang or trees to give protection from predatory skuas. Nests are situated at least 75 cm apart. Auckland Island shags are monogamous. The 3 pale blue eggs (62 x 39 mm) are laid November-February in a large flattened bowl of twigs, tussock, seaweed and guano. Both sexes share in incubation (c.28 days) and chick-rearing. The fledging period is unknown. Two chicks are usually raised.

Elaborate male display includes gargling, gaping, bowing, kink-throating, penguin-walking, and various other body postures. Mated birds greet by moving their wide-open bills back and forth in front of their pulsating breast. Females forage shortly after dawn during the breeding season, returning in the middle of the day to relieve the male bird, which then departs to forage during the afternoon and returns before dusk. Incubation changeover is accompanied by nest material gathering and regurgitation of a pellet of food remains.

Auckland Island shags roost and nest colonially on rock ledges and on the tops of steep cliffs. Nest sites are abandoned if sheltering plants are killed by guano; tide waves sometimes destroy nests. They sometimes feed in flocks.

A medium-sized, black-and-white marine shag with black plumage on the head and neck, and a thin white medial strip connecting the white chin to the breast. In breeding plumage it has a black head crest, magenta-pink eye ring, red facial skin and a red-orange throat pouch.