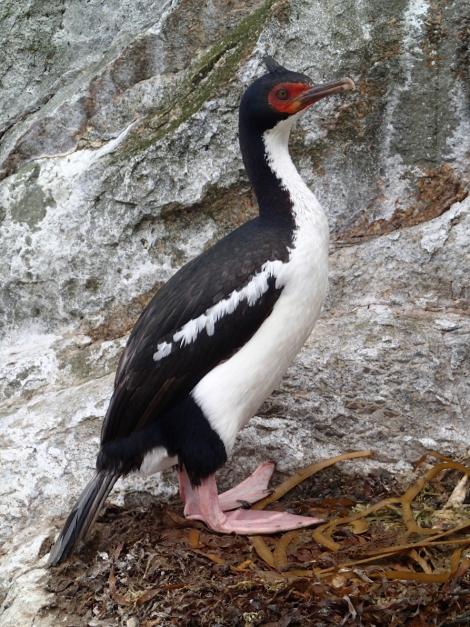 The Bounty Islands were discovered by Captain Bligh in 1788 on the ill-fated voyage of the Bounty. They are part of the New Zealand Subantarctic Islands World Heritage Area. At only 135 hectares, they are the smallest archipelago within the group, and are located 624 km east of Bluff at 47°45'S 170°02'E. Their name is a misnomer, as the islands are barren granite outcrops, devoid of soil and plants, apart from lichens, green algae and a few tufts of cress. But what they lack in plant cover is more than made up for with teeming populations of breeding fur seals and seabirds, principally Salvin’s mollymawks, erect-crested penguins and fulmar prions. The Bounty Island shag is endemic to the islands and is the only shag present there.

Adult Bounty Island shags are black with a blue sheen above, and white below, although the white belly is often heavily stained by nest material. The upper wing-coverts are dark brownish-black with a green sheen. White ‘alar’ patches are present on the upper wings of most individuals, and are visible in flight and at rest, appearing as a white patch on the otherwise dark upper-wing. Some males also have white patches on their backs. The slender, hooked bill is brown or pink with a dark ridge and lighter tip. The skin at the base of the bill and gape are orange-yellow and the gular pouch red-orange and/or purple. The iris is light brown. A single crest develops in the breeding season. The feet are pink with variable amounts of grey on the tarsi and toes. Sexes are alike but the males are slightly larger. Juveniles are distinguished by having brown rather than black on the upper parts, and pale facial skin.

Similar species: no other shag species have been recorded from the Bounty Island. If individuals were to stray to other subantarctic islands, they would most likely be confused with the similar Auckland Island shag, which has a narrower white throat stripe and (in breeding plumage) brighter and more varied facial skin colouring.

Population censuses of mature individuals have been periodically undertaken and show considerable variation, although whether this variation reflects true changes in population size or is related to other factors such as survey methodology or timing is uncertain. In 1978 there were 1,138 adults, with 368 counted in 1997, and 618 in 2005. A 2011 survey suggested that the population had remained stable since 2005.

Bounty Island shags are confined to breeding on a few ledges on cliff faces due to intense competition for breeding space with fur seals, mollymawks and penguins. Subantarctic skuas and southern black-backed gulls are likely to take some eggs and chicks, but the greatest threat to Bounty Island shags is the weather. The tiny Bounty Islands offer little protection from severe storms, which cause chick losses through hypothermia or being blown or swept from exposed nests, or their starvation if storms prevent adults foraging. The conservation status of this species was moved from Nationally Endangered to Naturally Uncommon in 2016.

Bounty Island shags nest colonially on narrow cliff ledges or alcoves and occasionally on skyline ridges throughout the archipelago. Breeding commences in October when males occupy and defend suitable nesting sites, and display to females. Females choose suitable males and build the nest from material mainly supplied by her mate. Nests are built from the brown alga Marginarilla, which the male dives for, and feathers, stones, debris, and mud. Nests are 35 cm wide and 15 cm high and their centres are about a metre apart. Both males and females continue to display on the nest by drooping their wings and exposing their backs, up until the 2-3 eggs are laid. Both sexes incubate, with females leaving to forage shortly after dawn, returning in the middle of the day to relieve the male, who forages during the afternoon. Incubation changeover is accompanied by recognition displays including forward gaping and nest worrying. The male often regurgitates pellets of food waste and pebbles at this time, and dives to collect material to augment the nest. Males may accompany these recognition displays with soft vocalisations. Eggs are thought to hatch in late November and December.

Bounty Island shags are restricted to inshore waters around the islands and sometimes form large foraging flocks. Like other pink-footed shag species, they do not spread their wings to dry. Males perform elaborate courtship displays, including ‘gargling’ with an upright body stance, swinging the head back until the crown touches the rump. This is accompanied by bill opening, a raised tail, and drooped wings.

Analysis of regurgitated pellets revealed a varied diet of small fish and squid, snails, and sea urchins, indicating that Bounty Island shags forage on the seabed.

Kennedy, M.; Gray, R. D.; Spencer, H. G. 2000. The phylogenetic relationships of the shags and cormorants: can sequence data resolve a disagreement between behaviour and morphology? Molecular Phylogenetics and Evolution 17: 345-359.

A large marine shag that is black above and white below. Extensive white alar patches on the black upper wings are visible in flight and at rest.