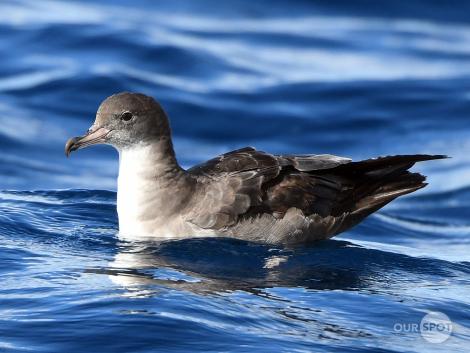 The pink-footed shearwater is a pale-bellied version of the locally-breeding flesh-footed shearwater. It has a parallel distribution in the eastern Pacific, breeding on islands off the coast of Chile and migrating to temperate waters off North America rather than off Japan. Occasionally they stray to the west as far as New Zealand and Australia. The behaviour of the two species is similar.

The pink-footed shearwater is a large brown-and-white shearwater. The upperparts are greyish-brown, darker on the head and neck, and the flight feathers and tail. Underneath it is white variably marked with smudgy grey especially on the throat, sides, lower belly and under the wings. The bill is pink with a black tip and the feet are pink.

A summer breeder in the eastern Pacific on the Juan Fernandez Islands and Mocha Island off Chile, migrating to the North American coast from Mexico to British Columbia.

The first 2-4 birds off the Canterbury Bight in June 1979 were initially misidentified as North Atlantic (Cory's) shearwaters. Eight subsequent sightings have been accepted, most of single birds off Kaikoura, and most between December and February: January 1994, December 1998, February 1999, December 2001, January 2003, February 2008. The two sightings away from Kaikoura were east of Stewart Island in November 2018, and near the Poor Knights Islands in July 2021 (an exceptional winter record for this transequatorial migrant).

Although pink-footed shearwater are found in fairly large numbers (20,000 pairs), colonies are found on just three islands. These colonies suffer soil erosion and burrow collapse due to introduced rabbits, goats and cattle. On the various colonies there is predation by rats, cats, dogs and coatis, and a still substantial but illegal harvest of chicks on Isla Mocha. At sea they readily scavenge and may be incidentally killed on long lines and by entanglement in nets and other gear.

Pink-footed shearwaters cover large distances searching for food and have a slower wingbeat and soar more than most other shearwaters. They may feed alone or in mixed flocks with other species.

Pink-footed shearwaters feed mainly over the continental shelf but also deeper water. They mainly take small fish and squid with some crustaceans, which are seized from the surface or pursued underwater and they may follow boats to take fisheries waste.

A large brown-and-white shearwater, greyish-brown above with darker shading on the head, neck, flight feathers and tail. The underparts are white variably marked with smudgy grey, especially on the throat, sides, lower belly and underwings, the bill is pink with a black tip, and the feet are pink.

Calls from bird on ground