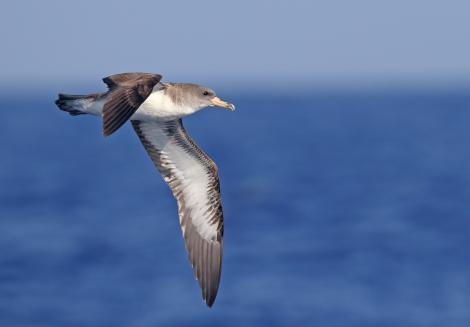 Cory’s shearwaters breed far from New Zealand, on islands in the temperate North Atlantic Ocean. In the non-breeding season they migrate to the South Atlantic Ocean off Brazil, Uruguay and Argentina and off South Africa in both the Atlantic and Indian Oceans. They do not often stray further, but one was presumably caught up in the prevailing westerly winds and swept into the Tasman Sea where it died and was washed ashore on the Manawatu coast in January 1934. It remains the only record for New Zealand and none has been found in Australia yet.

Cory’s shearwater is a large, heavy bodied shearwater, greyish brown above, on the face to below the eye and on the sides of the neck. The under surfaces are clean white except for the blackish tail and flight feathers. The bill is horn-yellow with a dark tip, and the feet vary from pink to dark.

Cory’s shearwaters breed on islands off Portugal, the Azores, Madeira and Canary Island groups. From November to May, non-breeding birds are found in the South Atlantic Ocean offshore from Brazil, Uruguay and Argentina and in the vicinity of southern Africa including the Indian Ocean occasionally as far as Amsterdam and St Paul Islands. They are pelagic in temperate water 16°C or warmer, coastal to offshore.

The sole New Zealand record was a bird found dead on Foxton Beach in January 1934, and preserved in Te Papa (specimen registration no. OR.000234).

Cory’s shearwater is a very common species estimated as having a population from 600,000 to 1,200,000, thought to be in gradual decline.

An easy flier on broad wings, Cory’s shearwater may appear relaxed in flight but it moves fast in long glides, interspersed by a few deep, powerful wing beats. They usually stay close to the surface but may rise higher in strong winds.

Cory’s shearwaters often form flocks of up to about 100 birds, sometimes with other seabird species. They are attracted to offal.

Cory’s shearwaters consume fish and squid taken from the surface or by shallow dives, occasionally to 15 m.

A large heavy-bodied shearwater that is greyish brown above, on the face to below the eye and on the sides of the neck, with clean white underparts except for the blackish tail and flight feathers. The bill is horn-yellow with a dark tip, and the feet vary from pink to dark.

Calls on and over breeding colony