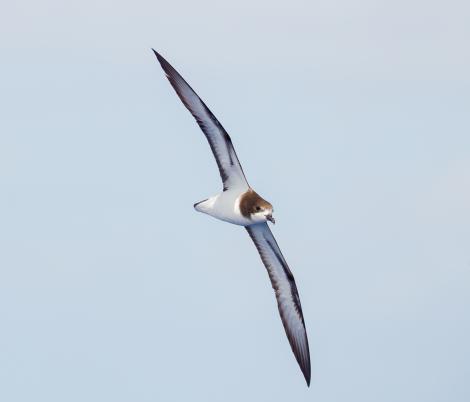 Gould's petrel is a small, dark-hooded gadfly petrel which is occasionally identified in New Zealand coastal waters, or washed up on west coast beaches. Two populations are known, in eastern Australia and New Caledonia. The Australian population is smaller in numbers, but is increasing in response to conservation management. The New Caledonian population is large, but declining due to the impacts of introduced predators. Gould’s petrels are regularly seen in the southern Tasman Sea during the summer breeding season, as far east as Fiordland and south to Antarctica. Tracking studies have revealed that the two populations use different migration routes and have non-breeding ranges in different areas of ocean. The Australian birds migrate to the central Pacific, south of Hawaii, while the New Caledonian birds migrate to the eastern Pacific, west of Ecuador.

Gould's petrel is a small gadfly petrel with a white face that contrasts with a prominent dark hood covering the crown, neck, sides of the breast and sides of the cheeks to below the eyes. The pale grey mantle contrasts with the darker grey rump, and the rounded tail has a brown wash. The upperwings are dark brown-grey with an indistinctive blackish elongated ‘M’ extending across the back. The underparts are white, apart from a broad black margin to the outer underwing, with a dark diagonal bar running from the leading edge towards - but not reaching - the body. The slender, hooked bill is black, the eye is dark, and the legs and toes are pink with dark outer toes and webs. The sexes are similar and juveniles resemble adults. Two subspecies have been described based on differences in plumage and measurements, but the claimed diagnostic differences have subsequently been found to be invalid. In flight, Gould's petrel recalls a small shearwater but with less fluttering and shallower flight peaks; it often adopts bat-like weaving flight and may rise high over the ocean.

Voice: Gould's petrels in flight over the colony at night give a cicada-like tit-tit-tit-tit. On the ground or at the nest, they make squeaky high-pitched pee-pee-pee-peeoo sounds and low trembling growls.

Similar species: Gould's petrel has a broader dark carpal-bar on the underside of the wing than most other small "Cookilaria" gadfly petrel species (including Cook's, Pycroft's, Stejneger's), but see collared petrel and black-winged petrel. The species regularly present in New Zealand waters (Cook's, Pycroft's and black-winged petrels) all have paler grey heads. Stejneger's petrel is smaller with the dark ‘hood’ reduced to more of a cap (with a broader white forehead, and a wedge of white below the ear, separating the cap from the dusky sides of the upper breast) and has an incomplete dark carpal-bar. Collared petrels (and some Gould's petrels) have a variable incomplete-to-complete breast-band, but only collared petrels are sometimes entirely dark-bellied. The palest collared petrels are very similar to Gould’s petrels, though collared petrels have a proportionally longer and more strongly graduated tail and greater contrast between the white underwing coverts and grey primary bases.

The Australian population of Gould's petrel breeds mainly on Cabbage Tree and three other small islands off Port Stephens, northern New South Wales. A few pairs breed on Montague Island and one of the Tollgate Islands off south-eastern New South Wales. On Cabbage Tree Island, nesting is concentrated in two steep gullies with scree slopes and a canopy of cabbage tree palms and fig trees. Fallen palm fronds provide protection from the elements and conceal birds and their nest sites from predators. In New Caledonia, the species is known to breed in three colonies between Mts Dzumac and Poya. Gould's petrel may also breed on Raivavae in the Austral Islands. During the breeding season, Gould's petrels are regularly seen in the Tasman Sea and as far south as the Antarctic coast. Outside the breeding season, they migrate east and north. Tracking studies show that the two populations use different migration routes and range over different parts of the Pacific Ocean when not breeding. Gould's petrels that breed in Australia migrate to the central Pacific south of Hawaii, while those that breed in New Caledonia migrate to the eastern Pacific west of Ecuador.

The total population of Gould's petrel is estimated at 3,000-21,000 individuals.

There are more than 30 records of beach-wrecked Gould’s petrels in New Zealand mainly from the west coast of the North Island, during November-June. New Zealand sight records include several birds seen at sea in waters west of Foveaux Strait and off the Fiordland coast, and off the Three Kings Islands.

The Australian population of Gould’ petrel has increased due to conservation actions, but the New Caledonian population is declining due to predation by introduced mammals. On Cabbage Tree Island, introduced rabbits have been eradicated, and birdlime trees removed to reduce entanglement. Native pied currawongs and Australian ravens were culled as they killed many adults and nestlings. Successful translocation of nestlings to nearby Boondelbah Island was also carried out. On New Caledonia, introduced ship rats take eggs and chicks, feral pigs dig chicks from burrows, and feral cats are also a threat. The local government used to fund rat control near a large breeding colony, but this has been discontinued.

Gould’s petrel is an annual colonial breeder that typically nests in rock crevices, underneath fallen cabbage tree palm fronds, hollows in fallen trees and palms, and cavities in buttresses of trees on islands off New South Wales. In New Caledonia, they breed in loose colonies of 10-50 pairs in burrows and natural cavities on steep, forested slopes 350 to 650 m above sea level (Australian birds do not dig burrows). Birds typically arrive on Cabbage Tree Island from early October. The single white egg is laid from early November to mid-December. Incubation is shared and takes about 49 days, with incubation shifts lasting up to 3 weeks. Chick stays in the nest for 13 weeks, growing up to 150% the weight of an adult bird before losing weight and fledging from late March to early May. The breeding season in New Caledonia commences about 1 month later than in Australia.

After breeding, adults and juveniles migrate and spend the rest of the year at sea. Young non-breeding birds remain at sea for several years, returning to breed at 4-5 years old. Pairs return to the same site each year to breed. Banded adults have been recorded living over 40 years.

During the breeding season, Gould’s petrels feed mainly on squid, small fish and krill taken in the Tasman Sea and waters off southern Australia. They are occasionally recorded feeding in association with other seabirds, tuna and dolphins. Prey is picked up from on or near the sea surface.

A small gadfly petrel with a white face, black bill, prominent dark hood from the crown to the cheeks, a pale grey mantle contrasting with a dark grey rump, a rounded tail with a brown wash, and pink legs. The dark brown-grey upperwings have a blackish ‘M’ and the white underparts have a broad black margin on the underwing with a dark diagonal bar running from the leading edge towards the body.

Bird on ground at colony