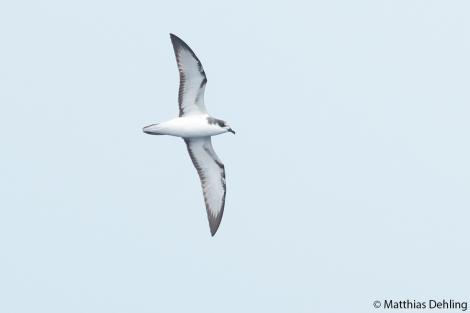 In 1891, the bird collection of the Science College Museum, Tokyo, was sent to Smithsonian curator Leonhard Stejneger for identification. Among these specimens, Stejneger recognised 18 new species, including two petrels from Mutsu, at the northern tip of Honshu Island, Japan. He measured and described these accurately, naming them Pterodroma longirostris, noting that they had been likely driven ashore by a gale, and that they probably bred on some “out-of-the-way islet”. It took nearly 50 years before New Zealand ornithologist R.A. Falla became aware that they were migrants from Isla Alejandro Selkirk (Masafuera), on the other side of the Pacific.

Although this elegant little petrel is not easy to identify at sea or as a storm-killed bird, it is one of the most distinctive of the nine species of similar-sized small Pterodroma petrels. All are grey above and white below, with black-tipped tails. However, Stejneger’s petrel has a distinctive dark crown and nape, accentuated by an extensive (23 mm) white forehead. A triangle of white extending towards the ear from the neck separates the dark cap from a partial dusky breast band. The underwing is white with a black bar extending a short distance from the carpal joint towards the mid wing base (this mark is present to some degree on all Pterodroma petrels with white underwings). The bill is slender, hooked and black; the eye is dark, and the legs and feet are pink with dark outer toes and webs.

Voice: Stejneger’s petrel are mostly silent at sea; in flight over the colony they give a rapid ti-ti-ti, similar to other small Pterodroma petrels.

Similar species: Gould’s petrel also has a dark head and nape, but its upperparts are darker and show less contrast with the black cap and nape. In Gould's petrel the dark cap is more extensive, the white forehead is only 12-13 mm in height, and the underwing bar is wider and longer. Pycroft’s, Cook’s and De Filippi’s petrel have pale grey heads and necks; and collared, black-winged, Chatham Island and Bonin petrels have very prominent black underwing bars. [Note that De Filippi’s petrel Pt. defilippiana, collared petrel Pt. brevipes and Bonin petrel Pt. hypoleuca are not yet known from New Zealand.]

Stejneger’s petrel breeds during October-April, and only on Isla Alejandro Selkirk (Más Afuera) in the Juan Fernández Islands, 850 km west of Valparaiso, Chile. The colonies are in fern forest above 850 m on steep, rugged mountain sides. In the southern summer birds at sea normally occur only in the Humboldt Current, although they disperse up to 2500 km southwest into the Southern Ocean in April, prior to migration. Stragglers (10 records, 13 birds), reach the North Island of New Zealand during the breeding season (November-January) and, more rarely, eastern Australia. Some of these were late-moulting - perhaps juveniles making a belated attempt to return to their breeding colony by a roundabout route. Scattered reports of this species in Hawaii and off California in the southern summer are thought to be juveniles, as many were in moult. After breeding, all birds migrate 16,000 km north-west across the Pacific towards their wintering grounds in the subtropical north-west Pacific off Japan. Here, they forage in the cold, productive waters of the Oyashio/Kuroshio Extension Current, which flows east from Japan to Hawaii. Many dally in Hawaiian waters en route, and some as far south as Tonga. Most adults moult between June and August in the north-west Pacific.

The total population of Stejneger’s petrels is estimated at 655,000 birds, based on recorded densities at sea and the breeding estimates of Brooke (1987).

There is extensive predation on breeding colony by cats, and probably rats.

Stejneger’s petrels breed in burrows between 850 and 1100 m above sea level on Cerro de los Inocentes, Isla Alejandro Selkirk, in a mixed colony with Juan Fernández petrels. Laying and fledging periods have not been accurately determined. They most likely lay in November and fledge in April, judging from museum specimens.

In the eastern tropical Pacific, Stejneger’s petrels foraged solitarily, and by night. Diet diversity was high, but did not vary significantly with season or sex. Stejneger’s petrels ate mostly fish (60%), with myctophids (which come to the surface at night) making up over 34% of the diet. Other frequent items were jellyfish.

Tanaka, Y.; Kaneko, Y.; Sato, S. 1985. Distribution and migration of smaller petrels of the genus Pterodroma in the northwest Pacific. Journal of the Yamashina Institute of Ornithology 17: 23-31.

A small gadfly petrel with a slender hooked black bill, dark eyes, pink legs, dark crown and nape, white forehead, and a triangle of white extending towards the ear from the neck separating the dark cap from a partial dusky breast band. The underwing is white with a short black bar extending from the carpal joint towards the mid wing base and the tail is tipped with black.