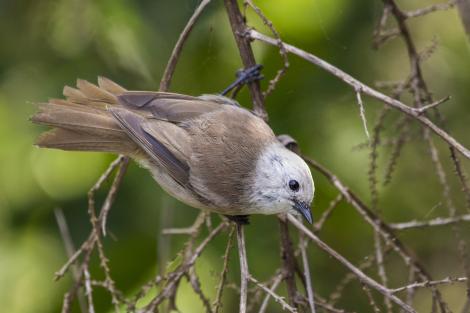 Whiteheads are gregarious songbirds that live in noisy groups of up to 8 members and that are often heard before they are seen. They are only found in the North Island where they inhabit mostly the canopy regions of tall dense forest. Their numbers have been in decline but relocations in recent years have seen some very good results with several newly established populations. Whiteheads are the only North Island hosts for the long-tailed cuckoo.

Whiteheads are small songbirds with a compact body, short tail and bill and long legs. The head and underparts are white or whitish. Upperparts, wings and tail are brown-grey. Bill, legs and eyes are dark.

Voice: whitehead song is a characteristic viu viu viu zir zir zir zir or canary-like twitter. Several other chirps or chatters are used for constant communication within the group.

Similar species: although some species such as sparrow and silvereye are similar in size, the distinct white head and underparts make the whitehead easily distinguishable from other small passerines.

The whitehead occurs only in the North Island of New Zealand. Its mainland distribution is south of a line connecting the Pirongia Forest, Hamilton and Te Aroha. It is locally common though patchily distributed south of this line, and to the north is limited to offshore islands and one fenced translocation site. Whiteheads are naturally common on Little Barrier and Kapiti Islands, and have been successfully introduced to Tiritiri Matangi Island, Motuora Island and Tawharanui Regional Park in the Auckland area, plus Maungatautari, Mana Island, Zealandia/Karori Sanctuary, and Rotokare. Attempts to establish whiteheads in the Waitakere ranges (Ark in the Park) and at Cape Sanctuary (Hawke’s Bay) are continuing, and in 2011 or 2012 they were released on Moturoa Island (Bay of Islands) and Motuihe, Rangitoto and Motutapu Islands in the Hauraki Gulf.

Whiteheads are abundant on some pest-free offshore islands and mainland sites where predatory mammals are effectively controlled or excluded. They can be among the most abundant forest birds present at these sites (e.g. on Kapiti and Little Barrier Islands).

In the past, whitehead numbers declined dramatically due to forest clearance and predation by introduced mammals (particularly ship rats and stoats). They are reluctant flyers that do not often cross open ground, and so are very vulnerable to habitat fragmentation, as local populations that die out cannot be replenished. In the late 1800s, whiteheads disappeared from the northern North Island including many offshore islands in the Hauraki Gulf. They survived on Little Barrier and Kapiti Islands and these two populations have been used as source populations for numerous translocations.

Whiteheads produce a single clutch per season from October to January. Nests are tightly woven, neat cups lined with fine materials such as natural fibres or moss. They are usually built in tree forks, hidden in dense canopy vegetation. Clutches usually contain 3 eggs, laid on consecutive days by the primary female. The female is also the sole incubator. The primary male or helpers may feed her as well as her young, both on and off the nest. Whiteheads are very inconspicuous around their nest which makes nests hard to find. Incubation takes about 18 days, and the chicks leave the nest when 16-19 days old.

Whiteheads are host to the brood-parasitic long-tailed cuckoo. The cuckoo lays her egg into the whitehead’s nest, and the whitehead incubates it along with her own eggs. After the cuckoo chick hatches, it ejects whitehead eggs and/or chicks from the nest and is raised by itself.

During the breeding season, whiteheads form very vocal, sedentary groups. These groups may break up or disperse to increase their foraging areas during the non-breeding season, when they can also be seen foraging in mixed-species flocks. Whiteheads are reluctant fliers but they move quickly through the canopy and are acrobatic when foraging, often hanging upside down.

A small songbird with a compact body, short tail, dark bill, legs and eyes, and long grey legs. The head and underparts are white or whitish with brown-grey upperparts, wings and tail.