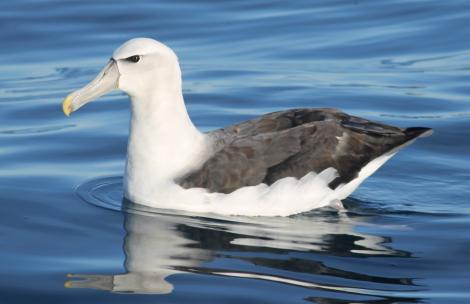 The white-capped mollymawk is a familiar albatross of coastal waters from Hawke Bay south, scavenging around commercial and recreational fishing vessels. It regularly occurs further north also, and across the Tasman Sea. The largest of the mollymawks, its main breeding grounds are in the Auckland Islands (especially Disappointment Island), with a second subspecies breeding on islands off Tasmania and ranging into the Tasman Sea and occasionally to New Zealand.

The white-capped mollymawk is a typical medium-sized albatross. It is black across the upperwings, with a white lower back and rump and black tip to the tail. The underparts are white, with narrow black borders under the wing and a small black notch in the “armpit” at the base of the leading edge of the wing. The head and neck are white, with a small dark patch in front of the eyes and a light wash of grey on the cheeks. The bill is blue-grey on the sides with a yellowish tip and base. Juveniles fledge with an olive-grey bill, darker at the tip. This gets paler with age from the base, so that subadults appear like adults but with a dark tip to both mandibles (c.f. adult Salvin’s mollymawk, with a dark tip to the lower mandible). More than 90% of breeding adults of the New Zealand subspecies retain a dark spot near the tip of the lower mandible (though much less extensive than in Salvin's mollymawk). At-sea separation of the two subspecies is difficult and requires close scrutiny to determine the presence of yellow at the upper base of the bill (indicating Tasmanian mollymawk). In the hand 84% of specimens may be separated by taking a range of wing chord, maximum head width, and two bill measurements.

Voice: white-capped mollymawk are usually silent at sea, though may give harsh croaking when squabbling for food. They utter a variety of brays, croaks and wails during courtship.

Similar species: Salvin’s mollymawk is closely related, and has an extensive pale grey head, throat and nape; the bill is grey-green, with a paler top and bottom and a black spot at the tip of the lower mandible.

During the breeding season (November-June) New Zealand white-capped mollymawks occur throughout coastal New Zealand, especially from Cook Strait south, and extends across the Tasman Sea to south-east Australian waters. After breeding most birds remain in Australasian waters, but about 20% of adults migrate across the Indian Ocean to seas off South Africa and Namibia; it occurs as a vagrant in the South Atlantic. The Tasmanian mollymawk breeds on three islands off Tasmania (Albatross Island, Mewstone and Pedra Blanca) and apparently rarely crosses the Tasman Sea. A banded bird of the Australian subspecies was recovered dead at Waikato River mouth in July 1989, at age 2 years-old, and an adult was photographed in Cook Strait in May 2016 (the only accepted New Zealand records).

The New Zealand white-capped mollymawk breeds on Disappointment, Auckland and Adams Island in the Auckland Islands group, Bollons Island at the Antipodes Islands, and occasionally on the Forty-Fours in the Chatham Islands. By far the largest numbers breed on Disappointment Island where some 91,000 pairs breed annually. Estimates from aerial photographs taken annually at all the Auckland Islands breeding sites during 2006-2010 ranged from 75,000 to 117,000 breeding pairs annually. However, the population is largely a biennial breeder, and so the total population will be somewhat larger then these annual estimates. About 20 pairs breed at Bollons Island and up to 3 pairs at the Forty-Fours.

With the exception of the main Auckland Island all the white-capped mollymawk breeding sites are free of introduced mammalian predators. On Auckland Island feral pigs have largely restricted successful breeding to inaccessible nesting areas on steep cliffs. Feral cats are also thought to kill chicks on Auckland Island. Fisheries bycatch is the main threat to adult white-capped mollymawks. It was the most common albatross species observed killed in major New Zealand trawl fisheries 2004-2007. However, most significant mortality occurs in the seas off southern Africa, where an estimated 7,000-11,000 were killed annually by the South African pelagic longline fishery alone. Additionally, an estimated 7,700 “shy” type albatrosses were killed annually in the South African trawl fishery.

White-capped mollymawks breed in large, densely packed colonies. They are monogamous with shared incubation and chick care. The nest is a pedestal of mud, guano and vegetation accumulated from the immediate vicinity, and used and added to year after year. The single large (106 x 71 mm) white egg is laid from early November to December. Incubation probably 65-75 days; chicks probably fledge at about 115-130 days and are independent at fledging, in June-August.

As a typical albatross, white-capped mollymawks have perfected soaring flight. In strong winds they wheel effortlessly on their long, narrow, stiffly held wings. They use their webbed feet for swimming and as rudders when coming in to land. Their strongly hooked bills are used to grasp prey whilst the sharp edges of the upper mandible are used to slice it into manageable portions. However, albatrosses have a great capacity to extend the throat, and so can swallow large pieces of food.

At their breeding colonies, white-capped mollymawks use an elaborate series of displays and calls to maintain their pair bond and to defend their nest pedestal. They are mostly biennial breeders, and so do not breed in the year following successfully rearing a chick. However, during this year they may return to the breeding colony to maintain their nest site and maintain their bond with the same partner.  After breeding the colonies are deserted and most birds spend the intervening time in Australasian waters, especially the Tasman Sea. The other 20% of the birds migrate across the Indian Ocean to seas off southern Africa.

A medium-sized albatross with white head, neck, lower back and rump, black across the upperwings, black-tipped white tail, a small dark patch in front of each eye and light grey cheeks. The blue-grey bill has a yellowish tip and the underparts are white with narrow black borders under the wing and a small black notch in the “armpit” at the base of the leading edge of the wing.