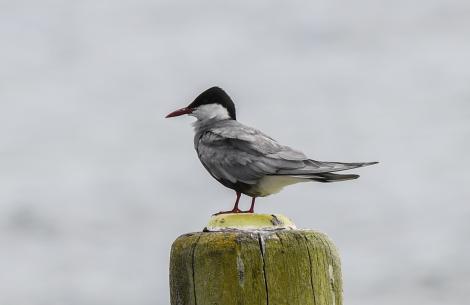 Whiskered terns breed inland in Australia and are able to exploit the large areas of temporary freshwater sometimes available there. When this happens, colonies of thousands may form. This forces them to disperse in drier times and they also migrate to the tropics after breeding. Both of these attributes probably help to drive the occasional vagrant to New Zealand.

Whiskered terns are a little smaller than the more common medium sized terns in New Zealand, and have a distinctively short and shallowly-forked tail. They are distinctive in breeding plumage, being a little darker in shade than a white-fronted tern with a black cap, extensive white cheeks, a grey breast and sides with a darker grey patch on the belly, and with white under the tail up to the legs. The legs are fairly long and they and the bill are dark red. In non-breeding plumage they are paler, especially on the breast and belly, the crown becomes pale, finely streaked with black and a narrow black band runs across the nape from eye to eye. The bill becomes black with a reddish tinge at the base and the feet and legs are blackish.

Feeding whiskered terns have a buoyant flight, less direct than marine species. They are agile in the air and very precise, dipping down to pick up food from the ground or surface of the water in flight and hawking insects in the air. Occasionally they may hover and make shallow dives. In this they resemble white-winged black and black-fronted terns.

Voice: the single birds seen in New Zealand were not recorded as calling, but when in flocks whiskered terns have a harsh reedy call.

Similar species: the only other pale tern feeding over fresh water in New Zealand, especially with the characteristic flight pattern, is likely to be the white-winged black tern which occurs annually in small numbers. These birds are smaller, slimmer with a finer bill and may have irregular black blotches on the body during moult. Black-fronted terns have similar plumages to whiskered tern, but always have grey plumage and a white rump (cf. grey in whiskered tern) while their bills and feet are orange rather than red.

Almost all of the recent breeding records of whiskered terns in Australia come from the south-east but after breeding they move north to northern Australia, New Guinea and Indonesia. They are a freshwater tern, rarely found over brackish waters or sheltered harbours. They are sensitive to rainfall, moving to temporary wetlands when they form, and retreating to permanent water in the dry season. They often breed on flood waters, and colonies may form very quickly when conditions are right.

There have been about 10 sightings of whiskered terns in New Zealand, some of which have yet to be submitted to the Records Appraisal Committee of the Ornithological Society of New Zealand. The sightings include: Lake Horowhenua (2 birds, August-October 1977, May to September 1978), Lower Waikato River (August-September 1978), Pukekohe (March 1980), Lake Rotorua (May 1987), Bromley Oxidation Ponds, Christchurch (December 2005), Blenheim Sewage Ponds (January 2006), Lake Grassmere (February 2006; the last three records probably refer to the same bird), Travis Wetland, Christchurch (May 2007), and North Kaipara Head (October 2009).

In Australia whiskered terns often forage in small flocks, but apart from the first sighting, all New Zealand records have been single birds.

Whiskered terns take a variety of small animals, particularly insects, fish and crustaceans, but frogs, mice and lizards have also been recorded.

A small tern with a short shallow forked tail, a dark red pointed bill and long red legs. Breeding adults have a black cap, extensive white cheeks, a grey breast and sides with a darker grey patch on the belly, and white under the tail; non-breeding adults are paler, especially on the breast and belly, with a finely streaked crown, and a narrow black band running across the nape from eye to eye.