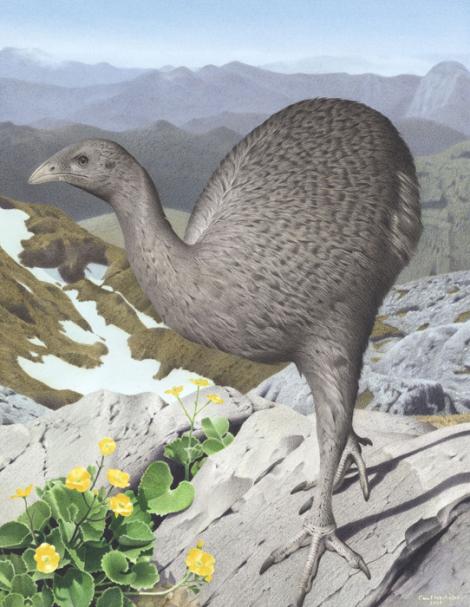 The iconic moa of New Zealand were giant flightless endemic birds grouped in three families, six genera and nine species. They evolved into a wide variety of sizes to become the largest terrestrial herbivores in prehistoric New Zealand. Together they represent the most diverse radiation of any New Zealand endemic bird group. DNA study shows the moa radiation occurred principally in the South Island, coinciding with the accelerated uplifting of the Southern Alps and the resulting increase in habitat diversity across New Zealand circa 5 - 8.5 million years ago. All the moa species became extinct abruptly, 500-600 years ago, as a result of human overhunting. DNA study suggests that moa were more closely related to the flighted South American tinamou than to the kiwi.

The upland moa was a relatively small, agile moa species that was once common in the South Island subalpine zone, especially north-west Nelson, Otago and Fiordland. It was rarer in eastern and lowland areas. The only species in the Family Megalapterygidae, it was distinct from other moa species in its smaller, less bulky build and feathered lower legs. Its long, slender toes may have been adapted for walking across snow. Its bill was more pointed than in most moa species and its mummified remains show it had two types of feathers: some with a greyish-white base, becoming blacker and ending in a white tip, giving a mottled effect, and others with a plain or slightly streaky appearance.

South Island only. Formerly widespread and common in the subalpine zone up to 2,000 m above sea level in high country herbfields, tussocklands and montane forest, from north-west Nelson and the Kaikoura Ranges, south to Fiordland and Otago.

The main cause of extinction was overhunting by humans for food. The remains of moa are widespread in middens, along with specialised tools used to cut up moa carcasses and to work bones into tools. Moa chicks may have been killed by the introduced Polynesian dog (kuri). Before human arrival, upland moa were preyed on by Haast's eagle.

DNA evidence and egg shell and bone remains found at rock shelter sites in north and central Otago suggest upland moa once nested in rock shelters throughout this region. Plant remains found at nest sites strongly suggests that they built the nests in late spring-early summer. The plant remains found show they clipped twigs 20-60 mm long and up to 4.7 mm wide from a range of locally available trees and shrubs, using their bill. These twigs were then used to build a nest that was a shallow bed of clipped twigs, coarse vegetation and stripped bark. Nesting in rock shelters suggests that they bred as solitary pairs, rather than in colonies. One or two dark olive to pale green eggs were laid per breeding season. The relatively large eggs (likely to have been about 162 x 111 mm) in comparison with body size suggest a long incubation period, probably more than two months. The male is thought to have incubated the eggs, as they do in most other ratites. Chicks were probably able to forage for their own food soon after hatching.

This relatively small moa species was more agile than other moa. It lived mainly in the subalpine zone, including rocky subalpine sites such as the tops of Mt Owen and Mt Arthur in north-west Nelson. It ate a wide variety of alpine herbs and browsed southern beech and small shrubs in montane forests. The best preserved mummified remains of moa are of this species, and were found in relatively dry, enclosed rocky subalpine sites. Some of these remains show signs of "shock moult", the first evidence of feather moult in any moa species. It is possible that moa plumage colouration and marking were driven by selection pressure to avoid predation by Haast's eagle.

The diet included leaves and small woody branchlets of many species, including southern beech, nectar-rich flowers of species such as flax and tree fuchsia, and subalpine herbs and small shrubs in open herbfield and grassland habitats.

A relatively small, slender moa with a small head, a delicate pointed decurved bill, and relatively large nostril and ear openings. It had mottled plumage extending to the base of the bill and covering the lower legs.