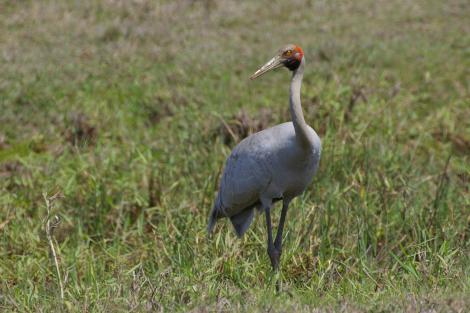 Cranes are very large birds that are superficially like giant herons or egrets. There are four records of cranes in New Zealand, but the species was not determined in any of these sightings. Two species occur in Australia: sarus crane Grus antigone gillae and brolga (Australian crane) G. rubicundus. The brolga occurs uncommonly in eastern Australia but is still common in northern areas. The sarus crane is an Asian species that was first recorded in Australia in 1966, since when it has spread rapidly and is now found across the north of the country. The sarus crane is slightly larger than the brolga – it is the tallest flying bird in the world. Either species might occur in New Zealand.

There are four key distinguishing characters to check in order to separate brolga and sarus crane:

1.         The extent of red skin on the head and neck (this is confined to the face and back of the head only in brolga, but extends part way down the neck on sarus cranes)

2.         The presence or absence of a dewlap – a flap of skin hanging under the chin (present in brolga where it is largest in males, absent in sarus crane)

3.         The colour of the trailing edge to the secondary flight feathers (dark tips in brolga, pale tips in sarus crane)

Voice: a trumpet-like call is given when flying and on the ground. The call of the sarus crane is higher pitched than that of brolga.

Similar species: white-faced heron is much smaller and lacks red on the head. Cranes fly with the neck held straight out, whereas all herons and egrets usually (but not always) hold the neck retracted in an ‘S’.

Cranes occur in freshwater swamps and marshes as well as on pasture and arable farmland.

Both brolga and sarus cranes are known to fly into powerlines in Australia and concerns have been expressed about possible windfarm mortality. Stock fencing around wetlands has also resulted in crane deaths.Cattle grazing and consequent reduction in scrub cover and an increase in grasses around wetlands may have resulted in an increase in sarus cranes, but brolgas have suffered from wetland loss.

Usually 2 eggs are laid in a nest of reeds and grasses in a wetland.

Both brolga and sarus cranes are partially migratory in Australia.

Brolga feeds principally on the bulkuru sedge Eleocharis dulcis in Queensland, but both species will also take a wide variety of seeds, invertebrates, frogs, small mammals and reptiles.

Heather, B.; Robertson, H. 1996. The field guide to the birds of New Zealand. Viking: Auckland.

Cranes are very large pale grey birds with a long robust pale pointed bill that look like giant long-necked, long-legged herons, and fly with the neck held straight out in contrast to herons which usually hold the neck retracted in an ‘S’. Both crane species present in Australia have bare red skin on the face and back of the head, while juveniles are gingery with flesh-coloured skin.