Geographical variation: Two subspecies: P. r. rostrata, which breeds in the South Pacific from Fiji eastwards to the Gambier Islands in eastern Polynesia, and P. r. trouessarti, which breeds on New Caledonia in southern Melanesia. The subspecific identity of birds that reach New Zealand has not been determined. 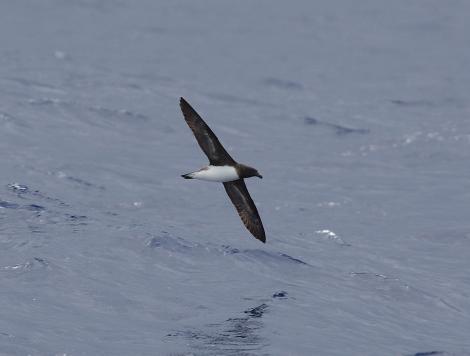 The Tahiti petrel is the largest of the four Pseudobulweria petrels, the others being Beck's, Fiji and Mascarene petrel. Previously grouped with the gadfly petrels, genetic research shows they are more closely related to the shearwaters. The Tahiti petrel was first described from the mountainous interior of Tahiti in eastern Polynesia. It is highly pelagic outside the breeding season, ranging across tropical waters of the South Pacific Ocean, and occasionally reaching adjacent subtropical waters off Australia and New Zealand. Usually seen singly at sea, it sometimes forms loose feeding flocks or joins feeding flocks of other seabird species. They have also been recorded associating with surfacing pilot whales. Tahiti petrels feed predominantly on dead squid seized from the sea surface.

The Tahiti petrel is a medium-sized dark-brown-and-white seabird that often appears black-and-white at sea. Its white breast and belly are sharply demarcated from its dark-brown hood, which extends from the head and neck to the upper breast. The mainly dark, long broad pointed wings span 84 cm. A thin white stripe runs along the centre of the mainly dark underwings. The bulbous black hooked bill has the tubular nostrils on top characteristic of all petrels, and the legs are flesh pink with blackish toes and webs. The sexes are similar, and juvenile birds resemble adults. The Tahiti petrel has a distinctive, straight-winged, languid flight that is more leisurely than most petrel species. It glides low over the water with long periods of arcing and banking, during which the wings are upturned with one pointing at the surface and one straight up. The gliding is interspersed with short bursts of shallow flapping. In stronger winds, the wings are held slightly more flexed, with arcing, banking and soaring movements becoming higher, resembling the flight of an albatross.

Voice: calls include prolonged nasal shrieks and a long series of whistles, ending with a hooting sound.

Similar species: the very similar looking Phoenix petrel has a pale throat and has white along the leading edge of the inner upperwing. Intermediate morph Kermadec petrels are distinguished from Tahiti petrel by their skua-like white wing flashes at the base of the primaries.

Tahiti petrels breed in the Marquesas, Society and Gambier islands (French Polynesia) and American Samoa in eastern Polynesia, and Fiji and New Caledonia (special collectivity of France) in south-east Melanesia. They formerly bred in Vanuatu and may breed on Rarotonga in the Cook Islands. Tahiti petrels occur at sea across the tropical South Pacific Ocean from the Coral Sea off Papua New Guinea, Australia and New Caledonia, and across Polynesia from Fiji and Samoa to Tahiti and the Gambier Islands in eastern Polynesia; birds occasionally reach New Zealand, with all 4 records during June-August 1988. Tahiti petrels disperse widely outside the breeding season and have been recorded north-east to Mexico and Peru, north-west to Taiwan, and south-west to the Mozambique Channel. They spend most of their lives far out at sea, rarely approaching land except to breed.

The total global population of Tahiti petrels has been estimated at c. 10,000 pairs plus up to 30,000 unpaired birds. Breeding occurs at a relatively large number of islands but it has a moderately small global population that is declining.

The IUCN Red List classifies the Tahiti petrel as Near Threatened because it is declining due to predation by introduced mammals, such as cats, dogs, pigs and rats at multiple islands, and localised mining activity in New Caledonia. On some islands birds are disoriented, injured or killed by collisions with power lines in urban areas after being attracted to artificial lights. This has mainly been recorded around Papeete in Tahiti, rural villages around Noumea, and active mining sites in New Caledonia. In French Polynesia, some birds are taken to use their white feathers as fishing lures.

Tahiti petrels breed in the Marquesas, Society and Gambier Islands of French Polynesia, and in American Samoa, Fiji and New Caledonia. They nest mainly in burrows on mountain ridges and hills, or in rock crevices with forest cover, up to 12 km inland. Nests are located between 150 and 2000 m above sea level on Tahiti. In New Caledonia, birds breed in the mountainous interior of Grande Terre and on the ground on coral and rocky islets in the southern lagoon. Breeding birds studied in the southern lagoon incubated a single egg for 54-56 days and the chick fledged 110-120 days after hatching. The relatively restricted breeding period there occurs October–December. On Tahiti there appears to be a peak egg-laying period between March and July. Dated museum specimens from the Marquesas Islands indicate laying has occurred there in July, August and October.

Tahiti petrels glide efficiently on long pointed wings, and are able to cover large areas in search of prey. They spend most of their lives far out at sea, rarely approaching land except to breed. Tahiti petrels nest singly or in loose colonies, where they are strictly nocturnal.

Tahiti petrels are thought to seize prey from the sea surface, where they specialise in foraging for dead squid.

A medium-sized petrel with white breast and belly demarcated from a dark-brown hood extending to the upper breast, long broad pointed wings with a thin white stripe along the centre of the mainly dark underwings, bulbous black hooked bill with tubular nostrils on top. It has a distinctive, straight-winged, languid flight that is more leisurely than most petrel species.