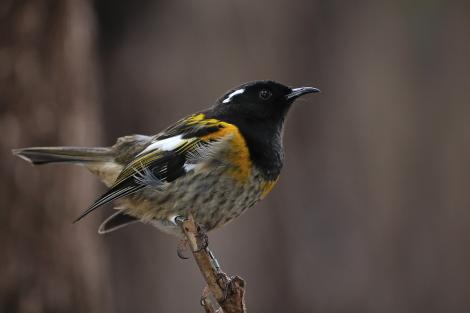 The stitchbird (hihi) was both rare and poorly known until the 1990s, as few people had an opportunity to visit the single remnant population on Little Barrier Island. However, thanks to successful conservation management and research, the stitchbird is now one of the better studied New Zealand bird species, and can be seen at several accessible translocation sites. Stitchbirds are often curious, approaching people for close examination whilst emitting warning calls; yet the calls’ high pitch, and the bird’s rapid movements and colouration can make them hard to detect. Until 2006 the stitchbird was considered to be a honeyeater (Family Meliphagidae), which includes tui and bellbird and c.100 other Australasian and Pacific species. However, genetic studies showed that the stitchbird belongs to a family of its own (Notiomystidae), closest to the New Zealand wattlebirds (Callaeidae, comprising huia, kokako and saddlebacks). The stitchbird has a complex and unusual breeding system that includes pair and group nesting as well as promiscuity. They use a variety of mating positions and strategies that, when considered together, are unique in the bird world.

Voice: male stitchbirds emit many variants of a whistle call with 2-3 notes (females may include some of these sounds in their warble). Both sexes produce a single note titch warning call, single-note high-pitched whistles, a quiet warble; short identification or aggressive warbles; and a repetitive single-note alarm call similar to bellbird’s. Females emit a loud single repetitive and fast alarm call when chased by males during the breeding season.

Similar species: female stitchbirds can be confused with female bellbird, which are greenish rather than greyish-brown, have a white line on the cheek and lack white wing patches. Bellbirds are also slimmer than stitchbirds, do not cock their tails, and have slower movements.

The total population is unlikely to exceed 2000 birds, although the Little Barrier population alone was estimated to peak at 6000 birds following cat eradication there in 1980.

The extirpation of stitchbirds throughout the North Island and on Kapiti and Great Barrier Islands was probably due to predation by introduced rats and, possibly, introduced diseases. Their disappearance was too early for introduced stoats to have been a factor. Since 1980 the main conservation method attempted has been translocation to sites where mammalian predators have been eradicated or controlled to low densities, followed by supplementary feeding due to poor habitat quality at release sites. The conservation status of this species was moved from nationally endangered to nationally vulnerable in 2013.

Stitchbirds breed in spring and summer. They construct a deep woven cup lined with tree fern scales and feathers, on top of a stick base inside a natural tree cavity or nest box. Up to four clutches of 1-5 (average 3) eggs can be laid per season, with clutch size decreasing with later breeding attempts. Females incubate alone, but males assist with chick rearing.

Stitchbirds have a complex social structure that includes a variable mating system and a multitude of interactions between the members of a population. For example, several males and females have been reported visiting others nests; chicks from various nests get together in crèches after fledging and perform behaviours that have been interpreted as play; adult males form groups with juveniles during the winter time where perhaps hierarchies are being formed. Our knowledge of such structure is only in its infancy and research is needed to understand it. Variable mating systems are unusual among birds with only six passerines in addition to stitchbird having been reported as polygynandrous (i.e. multiple male partners and multiple female partners occur; also recorded in dunnock (Prunella modularis); alpine accentor (P. collaris); Smith’s longspur (Calcartus pictus); superb fairy wren (Malurus cynareus); aquatic warbler (Acrocephalus paludicola); and red-billed buffalo weaver( Bubalornis niger)).

The stitchbird’s unusual mating system means that males copulate with more than one female, and compete for copulations with other males. To support such activity, male stitchbirds have testicles four times larger than expected by body size, and produce a large amount of sperm. At the peak of the breeding season, stitchbird males’ cloacal protuberance (where birds store sperm) is three times the expected size for a bird its size.

Stitchbirds copulate in two different positions: the common male-on-female’s back, and face-to-face, with the female on her back on the ground, a position no other bird so far is known to use. In addition to storing sperm, the engorged cloacal protuberance in stitchbirds changes the angle of the cloaca, allowing successful contact with the female’s cloaca during face-to-face copulation. Face-to-face copulations are considered forced (i.e. ‘rape’), and are mostly carried out by extrapair males. Of 105 copulations observed on Tiritiri Matangi, 34 (32%) were face-to-face, with only five the male partner.

Stitchbird translocations to various island and mainland sites have not yet resulted in self-sustaining populations. Fungal infections with Aspergillus fumigatus, a fungus that grows best in disturbed habitats such as those in regenerating bush, and not enough food have been identified as reasons for failure in establishing translocated populations. Currently supplementary feeding is the main management strategy used to support stitchbird translocations, with nesting boxes provided at sites with early stages of regeneration.

Low, M.; Pärt, T. 2009. Patterns of mortality for each life-history stage in a population of the endangered New Zealand stitchbird. Journal of Animal Ecology 78: 761-771.

'Stitch' call given by female (saddleback calls in background)