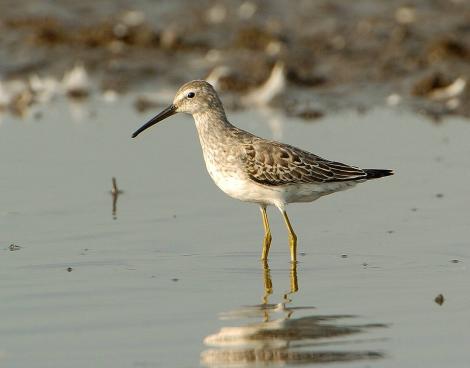 The stilt sandpiper is much like most other calidridine sandpipers. It has typical sandpiper morphology and structure (e.g., long bill, long legs, and pointed wings), and both its juvenile and adult plumages are similar to the other Calidris sandpipers. Even behaviourally it is a conventional sandpiper - it is a gregarious, long distant migrant. On the Arctic breeding grounds male stilt sandpipers conduct acrobatic aerial territorial displays, a behaviour observed in many other sandpipers (e.g., dunlin, and least, semipalmated and western sandpipers). However, recent genetic evidence suggests that the stilt sandpiper does not belong to the genus Calidris, but rather it is a close relative.

The stilt sandpiper is a medium-sized wader. In non-breeding plumage, it has brown-grey upperparts (head, neck, mantle, wings), grey sides that smudge into a whitish belly, a white rump and grey tail. It also has a distinctive whitish supercilium (eyebrow) and no wing bars. The dark-coloured bill is long relative to its body size and it has a slight downward curve. The long legs can be various shades of green, juveniles have legs that tend to be yellowy-green.

Similar species: the downward curvature of the bill could lead to confusion with curlew sandpipers and some subspecies of dunlin (e.g., C. alpina pacifica), but the stilt sandpiper has long, greenish legs, while both the curlew sandpiper and dunlin have black legs. Under poor lighting, the yellowy-green legs of a juvenile stilt sandpiper might lead one to think of dowitchers (Limnodromus scolopaceus or L. griseus) or yellowlegs (Tringa flavipes or T. melanoleuca) but neither group has a downward-curved bill.

Stilt sandpipers breed in the coastal regions of western Northwest and Yukon Territories (Canada) and Northern Alaska (USA). They winter primarily in the interior of central South America (Brazil, Peru, Bolivia, Paraguay, and Argentina). There are about 5 records of stilt sandpipers from Australia.

The sole New Zealand record was a single bird at Lake Ellesmere in September 1998. The bird likely travelled to New Zealand with a flock of migrating curlew sandpipers.

Stilt sandpipers are usually found in small mixed flocks (<22 birds) and feed in shallow waters, often with the water reaching their bellies.

During the non-breeding season stilt sandpipers feed primarily on a wide variety of freshwater aquatic invertebrates, supplemented by occasional seeds.

A medium-sized wader which in non-breeding plumage has a brown-grey head, mantle and wings, grey sides that smudge into a whitish belly, a white rump, grey tail, whitish eyebrows and no wing bars. The dark-coloured bill is relatively long with a slight downward curve and the long legs are green to yellow-green.