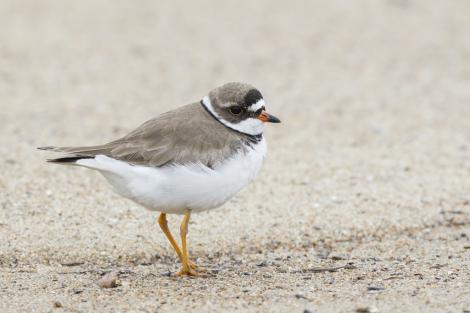 The name ‘semipalmated’ refers to the bird’s partially-webbed toes.

In breeding plumage, the semipalmated plover has uniform medium brown upperparts, white underparts, and a white neck collar (bordered below by a black breast-band) that extends around the neck. The forehead is white, while the rest of the front half of the crown and face is black. A small white patch or line behind the eye can vary in size or be almost absent but is an important key to identification of this species. The wings and tail are dark brown, with a narrow white wing bar and white tips to the tail feathers. The stubby black bill has an orange base, there is a fine yellow-orange orbital eye-ring, and the legs are dull yellowish. The sexes are similar. Non-breeding plumage is similar to breeding plumage, but the black on the head and breast-band becomes mostly grey-brown, the white eye-stripe can extend from behind the eye to run over the eye to the white forehead, forming a white supercilium. Juvenile plumage is similar to that of non-breeding adults, but the white supercilium is more prominent. The upperpart feathers have a narrow dark sub-terminal band and white fringe, making the back appear mottled. The bill is usually all black.

Voice: a two noted whistle during breeding. Other call a chee-wee or chuwit, similar to ringed plover.

Similar species: the semipalmated plover is very similar in size and appearance to the ringed plover (its Eurasian sister-species), which has occurred in Australia and may well turn up in New Zealand. The ringed plover in breeding plumage generally has a longer and thicker eye-stripe but that varies between the sexes; the white patch on the forehead is larger; black on the head is more extensive; the orbital eye-ring is incomplete or dark orange, the breast band is normally wider in any plumage, and the bill is slightly longer. Calls of ringed plovers are similar to those of semipalmated plovers. In the hand, the ringed plover has webbing only between the outer and middle front toes, whereas semipalmated plover has webbing between all three front toes although this is very small between inner and middle toes and very difficult to see in the field. Lesser sand plover is larger, with a longer bill, dark legs, and no white hind collar.

The semipalmated plover breeds across northern Canada and Alaska, with a small population breeding in Chukotka, Russia. These probably migrate across the Bering Sea and join North American birds wintering along coasts of the southern USA and much of coastal South America. The New Zealand records are probably Chukotka birds. Migration distance to New Zealand would be similar to that of birds migrating to South America. The semipalmated plover is a rare straggler to Australia, where there are more records of the more westerly-breeding ringed plover.

A range of coastal habitats used when not breeding, including estuaries, mudflats, beaches and sewage ponds. New Zealand records were of birds on the mudflats and shellbanks of the Firth of Thames and Manukau Harbour, including one bird that moved between these sites.

The first bird to be identified as a semipalmated plover was present on the Manukau Harbour and Firth of Thames during 2009-11. It was caught at Miranda in October 2010, when webbing between its toes was checked, and a weight of 45 g was recorded. The two previous records were of single birds in the Firth of Thames in 1970-71 and in 1983-85. These two birds were initially accepted as ringed plovers but a review of the sightings, and especially photographs by the OSNZ Records Appraisal Committee has determined that the 1970 record was not identified conclusively and has been removed from the list. The 1983 bird is now considered to have been a semipalmated plover, and consequently ringed plover has been removed from the New Zealand list and has been replaced with semipalmated plover. A third bird was found on the Manukau Harbour in December 2009, and then (possibly the same bird) at Miranda, Firth of Thames, in October 2010.

The global population of semipalmated plovers appears to be stable and is estimated at more than 150,000 birds. It is not clear how many are in Russia.

Classed as of Least Concern by IUCN, this species uses a wide range of habitats and migration stopover sites and is thus less threatened than those species using restricted habitats and specific staging sites.

The semipalmated plover breeds across the whole of Alaska and much of northern Canada. The nest is a shallow depression in gravel or sand, lichen, moss or grassy-tundra, lined with material from around nest site. The clutch is usually 4 eggs.

The semipalmated plover is a typical plover with the characteristic run-stop-pick way of gathering food that most plovers use. There is little information from the East Asian-Australasian Flyway where it is a rare vagrant to a few countries, and little is known about the species in Siberia.