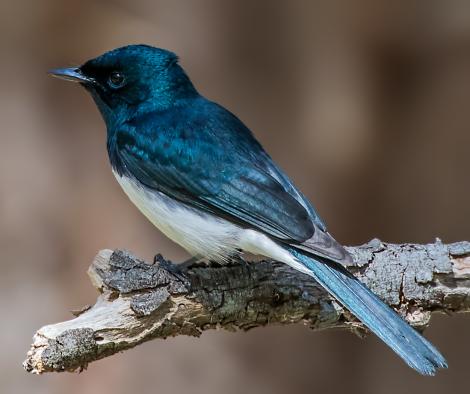 Vagrant songbirds can turn up anywhere. The first satin flycatcher for New Zealand was found when a phone call about a strange bird in an orchard near Gisborne was received and followed up. Similarly, New Zealand’s only white-winged triller also turned up on the east coast – in a Dunedin garden – and our only willie wagtail travelled even further, to Mangere Island in the Chatham Islands. These three examples highlight the sequence of improbable steps required for a small bird to survive a trans-Tasman flight and to arrive at a location where it is recognised by someone with sufficient knowledge and interest to either identify it or report it to someone who could.

Satin flycatchers are small, slender songbirds, similar in length to a chaffinch. They are restless birds, and often hunt insects from a perch high in the canopy and sub-canopy of trees, flying out and catching insects in mid-air or picking them from branches or foliage. On alighting the tail is sometimes wagged from side to side but more usually quivered. The two sexes look quite different. Males are glossy blue-black on the upper surfaces, head and upper breast. The lower breast and belly are clean white, with a sharply demarcation line across the upper breast. Females are grey with a blue gloss on the upper parts, the chin, throat and upper breast are rusty reddish, sharply demarcated from the white lower breast and belly. Both sexes can raise a small crest on the back of the head that may show as a slight peak on the back of the crown.

Voice: the common call of the satin flycatcher is a noisy, repeated up-slurred piping or whistle rendered as choo-ee or uu-chee, also a high pitched weir-to-weir-to-weir and a guttural zhurp.

The main breeding range of satin flycatcher is in south eastern Australia extending from about Adelaide to a little north of Brisbane. They are migratory, spending the non-breeding season in northern Australia, New Guinea and the Bismark Archipelago.

Satin flycatchers prefer tall, fairly open woodlands, often near water, and are usually seen towards the tops of the trees.

Two accepted records: a live female at Hexton, Gisborne (June 1964), and a dead male on Motueka sandspit (December 1988). A third record from Okarito was never submitted for appraisal.

Satin flycatchers are sensitive to logging in Australia, being found in old growth but not regrown forests.

Satin flycatchers are usually seen alone or in pairs

Almost entirely insects and other small arthropods, often caught while the bird is in flight.