Geographical variation: Two subspecies: A. i. interpres throughout Eurasia, Africa, and Australasia (including New Zealand), and A. i. morinella in the Americas. 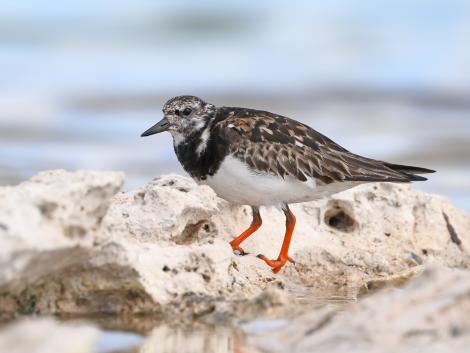 This stocky blackbird-sized bird is a heavyweight-lifter among waders. Its stout body, short powerful legs and feet, and robust wedge-shaped bill allow it to turn over large shells, stones and flotsam, such as driftwood and seaweed, while foraging for sandhoppers and other crustaceans. An annual circumpolar breeder on Arctic and subarctic tundra, the ruddy turnstone is one of around 40 Arctic breeding wading bird species that migrate south and reach New Zealand. Its migration route is not fully understood. Some birds may fly south over the Pacific Ocean and some may fly along the East Asia-Australasian flyway. After spending the austral summer in New Zealand ruddy turnstones are thought to fly to the Korean Peninsula before flying on to Siberian breeding grounds.

Recorded as far south as subantarctic Campbell Island (52°S), the ruddy turnstone is the third most numerous Arctic migrant wader species that occurs in New Zealand. Breeding adults have brightly patterned black, white, rufous-brown or "tortoiseshell" plumage on the upperparts, which develops annually towards the end of the austral summer.

The ruddy turnstone is a distinctive medium-sized, stocky dotterel-like wading bird with a short bill, short neck and short orange-red legs. It has 'tortoiseshell' plumage on the back, which is reddish-brown with blackish-brown patches on the back and upper wings, contrasting with the white underparts. The head, neck and breast are boldly pied black-and-white. A diamond-shaped white patch on the back and the white rump are prominent in flight. The short black-brown bill is wedge-shaped with a slightly upturned tip. In breeding plumage, males are slightly brighter than females. Non-breeding birds are markedly duller. Juveniles resemble non-breeding adults, but are browner with a paler head.

Voice: turnstones most commonly give a repetitive clear staccato whistle, a short tremolo, or a short squeaky staccato chuckle. Also a sharp kittick, a clear keeu, a twittering kititit, and a melodious kewk, kee-oo or kuiti in flight or when alarmed.

Similar species: shore plover is smaller with solid black on the face (other than juveniles), a red bill with a black tip, duller orange legs, and plainer brown on the back.

The ruddy turnstone is a circumpolar annual breeder on Arctic and subarctic tundra, mainly north of 60° N, making it one of the most northerly-breeding wader species. One bird was tracked in two consecutive years migrating from Alaska to Australia via the central Pacific and back to Siberia via the East Asian-Australasian flyway, each 'round trip' a journey of 27,000 km. A bird banded in Invercargill has been recorded on southward migration through Broome in north-west Australia during September in three successive years. This, along with tracks of birds flying south to Australia via coastal China and Indonesia, indicates some birds migrate along the same route before continuing on to New Zealand. After spending the austral summer in New Zealand ruddy turnstones are thought to fly to the Korean Peninsula in north-east Asia before flying on to Siberian breeding grounds.

Ruddy turnstones usually inhabit coastal areas, typically on rocky or stony shores, although sometimes on sandy beaches, salt marshes, mudflats, short grass and ploughed fields. Exceptionally they have been recorded on a braided river bed. Migration south is in August-September. Birds arrive in New Zealand during August-November and depart northwards during March-May, usually forming small flocks near the coast. They are widespread in New Zealand with regular sites in summer including Parengarenga, Rangaunu, Kaipara, Manukau and Tauranga Harbours, Waipu estuary, the Firth of Thames, Farewell Spit, Motueka estuary, Lake Grassmere, Kaikoura Peninsula, and coastal lagoons or estuaries in Southland. They are regularly recorded at Chatham Island and the Auckland Islands, and are vagrant on the Kermadec, Antipodes, Snares and Campbell Islands.

The total global population of the ruddy turnstone is estimated to number 460,000 - 730,000 individuals, with 1,000 - 3,000 birds reaching New Zealand annually in summer. Between 70 and 500 overwinter in New Zealand, probably immature birds.

As for most migratory waders that use the East Asian-Australasian flyway, the greatest threat to ruddy turnstones is reclamation and coastal development on the shores of the Yellow Sea destroying crucial staging habitat needed by birds on migration.

Ruddy turnstones breed in May-August in the Arctic, usually as solitary, monogamous pairs. The nest is a shallow scrape lined with vegetation. and the 4 eggs are incubated for 22 days, mainly by the female. The female departs a week or so later, leaving the male to guard the young until they fledge at 19 - 21 days. Immature birds usually remain in New Zealand for their first 18 months, and first breed at two years-old.

Ruddy turnstones are gregarious, often in small flocks of 20-100 birds of the same species, or with banded dotterels. Foraging methods include turning stones, shells and debris, such as driftwood and seaweed, probing and digging into mud and sand with the bill, and pecking food from rocks. They are able to overturn quite large objects. Birds may join together to move objects too big for one bird to shift. Molluscs and crabs are opened by sharp downward blows of the bill. Large flocks form on migration. Despite the absence of webbing on the feet, turnstones swim well. Their flight is strong and direct, usually low, in close formation.

Ruddy turnstones eat insects, spiders, crustaceans, molluscs, worms, other invertebrates, and plant matter. They sometimes take small fish and tern eggs, and scavenge carrion and discarded food. One bird was recorded feeding on a beachcast human corpse in the UK.

A medium-sized stocky wading bird with a short dark bill with slightly upturned tip, short neck and short orange-red legs. The head, neck and breast are boldly pied black-and-white and it has 'tortoiseshell' plumage on the back, which is reddish-brown with blackish-brown patches on the back and upper wings, contrasting with the white underparts.

Selection of calls including alarm call