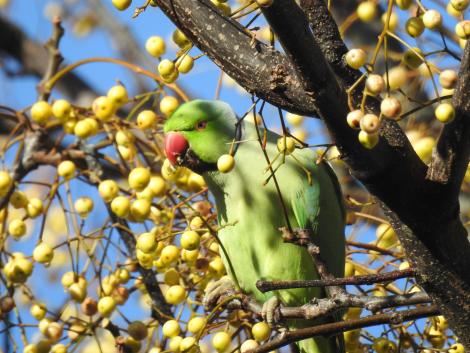 Rose-ringed parakeets are large pale green parakeets that are native to India and neighbouring countries, and also North Africa. They have been introduced to many other countries, where they often form large flocks in city parks. Rose-ringed parakeets are not considered to be established in the wild in New Zealand. Illegal releases of aviary birds in the northern North Island have produced short-lived feral populations that have so far been contained, mainly through live-trapping. The rose-ringed parakeet is considered a horticultural and conservation pest species, and is an Unwanted Organism under the Biosecurity Act. If you think you have seen a rose-ringed parakeet, phone the Ministry for Primary Industries Pests and Diseases Hotline 0800 80 99 66.

Rose-ringed parakeets are medium-sized, long-winged and long-tailed, pale green parrots with large, bright red beaks. The central tail feathers are twice the length of the rest of the long tail, creating a graduated or attenuated shape. The long, pointed wings are also distinctive in flight. Females and immatures are entirely green apart from yellowish undertail and greyish undersides to the primaries and secondaries, creating a broad grey rear half to the underwing. Males are similar but with the addition of head markings that include a narrow black stripe curving under the cheek from the black chin, tapering to a fine point towards the nape, bordered below by a narrow, pale pink band that extends around the nape (the ‘rose-ring’), and above by a broader pale blue band across the hind-crown. Males may also have blue central tail feathers. Many colour mutations exist in cage birds, including birds that are pale blue. The similar-looking Alexandrine parakeet (Psittacula eupatria) has the same colouration as typical rose-ringed parakeets but is larger, with a relatively larger beak, and a small brownish patch on the shoulder.

No viable wild populations are known in New Zealand. Most New Zealand sightings were of single birds, pairs and small flocks seen between North Auckland and Canterbury. Sightings have included Beachlands, South Auckland, where they bred (eradicated 2005-06), Okere Falls, Rotorua (at least 5 birds including a fledgling, from 2007, eradication attempted 2012, birds still present early 2015), Havelock North (from 2010, eradication attempted 2016), Tamahere, Hamilton (at least 2 birds, 2013), Hikutia, north of Paeroa (at least 15 birds, 2011-14, 12 birds captured or shot 2014-15), Takapuna (4 birds, 2015), and Christchurch (2016,30 birds released during a fire at a zoo, with most subsequently recaptured). There have also been sightings of single birds at Willowbank, Christchurch (2010), Te Atatu, Auckland (2014), and Masterton (2014-15). If rose-ringed parakeets become established in New Zealand, they could occupy urban and horticultural areas throughout the country. Elsewhere, rose-ringed parakeets occur up to 2000 m altitude, and they thrive in areas that experience winter snow (Himalayan foothills and European cities).

The main reasons that efforts are made to eradicate rose-ringed parakeets in New Zealand is to eliminate any potential threat to agriculture and horticulture, and to reduce the risk of parrot-specific diseases that they may carry infecting native parrots, including kakapo. They can occur in large flocks, and in India are considered one of the most destructive pests of cereal, nut and fruit crops. Rose-ringed parakeets could also compete for nest holes with native hole-nesting species. They may be kept in secure aviaries and cages, but it is illegal to release rose-ringed parakeets to the wild.

Few data from wild New Zealand birds. Two chicks were captured in a nest under a garage roof in Maraetai-Beachlands in 2006, and young birds had been seen flying with adults the previous year. In England, rose-ringed parakeets are mainly spring breeders, nesting inside holes in living or dead trees (sometimes in holes in rock faces or ruined walls). They breed as monogamous pairs, with incubation by the female. Both sexes feed nestlings and fledglings. Incubation of the usually 3-4, whitish eggs takes 22 days, and the nestling period is about 7 weeks.

Rose-ringed parakeets are fast-flying and noisy, and may occur in large sociable flocks once established. They are one of the few parrots to adapt to urban habitats. Feeding flocks often number dozens of birds, which fly tens of kilometres to communal nocturnal roosts in large trees. Roosting flocks may number in the thousands.

Rose-ringed parakeets feed mainly on seeds and fruit in the outer canopy of trees, but will descend to cereal crops and feeding tables. A wide range of fruits, nuts, berries, seeds, nectar, flower petals, buds and other vegetable matter is taken.

Juniper, T.; Parr, M. 2003. Parrots; a guide to the parrots of the world. Yale University Press, New Haven and London.