Geographical variation: Two subspecies, with E. s. albolineata in New Caledonia and the Loyalty Islands only 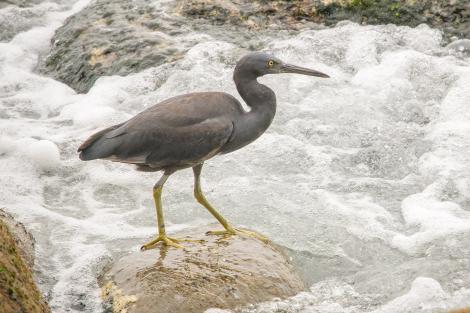 The reef heron is a dark grey wading bird most often seen in coastal areas in the north of the North Island. One or two birds may be found patrolling a rocky shoreline or nearby estuary. Although similar to the common white-faced heron it is not seen as frequently and has slightly different feeding habits. Reef herons occur throughout Polynesia, and their prevalence in northern New Zealand may reflect their preference for warmer climates.

The dark grey colour provides the bird with excellent camouflage when it is patrolling the shoreline rocks that are its main habitat. The reef heron is wary, and flies away when approached too closely. It will, however, use man-made structures for nesting.

The reef heron is a medium-sized dark grey heron with a long, greyish-yellow, heavy bill and greenish-yellow legs. During the breeding season it develops long plumes, mainly on its back but with some also on its chest. It has no white face but a small streak of white may sometimes be seen on the throat. In flight it tucks its head back into its shoulders so that the length of its neck is hidden, giving it a hunched appearance. It stays fairly low unless travelling a significant distance when it may fly higher. Immature birds are brownish.

Similar species: the white-faced heron is paler and two-toned grey, with an obvious white face when adult. It has a more upright stance, and uses a much wider range of habitats than the reef heron, which is never seen away from the coast. In flight, the reef heron is uniformly dark, whereas the white-faced heron's dark flight feathers contrast with the paler grey wing coverts and body.

Reef herons are widely distributed through eastern Asia, the tropical Pacific islands, Australia and New Zealand. Elsewhere there are two colour morphs, white and grey, with birds in intermediate plumage occurring also. Only the grey morph breeds in New Zealand, but there has been a single record of a white bird, at the Avon-Heathcote Estuary, Christchurch, in June 1987. Typical grey birds may be seen in the North, South, Stewart and some offshore islands, with more birds found in northern areas.

The reef heron is a bird of the rocky shore, where it stalks around rock pools and small rivulets of water that may carry fish. It can also be seen on estuary mudflats feeding at low tide and may occasionally be seen wading in the shallow waves on sandy beaches. It is rarely seen inland.

The New Zealand reef heron population is estimated at only 300-500 birds, but they are regularly seen at the sites where they occur, and those populations surveyed appear to have been stable over the past 40 years. They are widespread and abundant elsewhere in their range.

The shoreline habitat occupied by the reef heron has ongoing threats from encroachment by development, and the birds are vulnerable to disturbance by people and dogs. The conservation status of this species was changed from nationally vulnerable to nationally endangered in 2013.

Reef herons are usually solitary birds, and they occur at low densities, with territories of adjacent pairs often many kilometres apart. They nest in dark places that are fairly low to the ground, e.g. in rocky caverns and under old bridges, etc. Nesting is usually September to December with the 2-3 eggs incubated by both parents. Hatchlings have dark grey down and are fed partially-regurgitated food from both parents. They start wandering near the nest after about three weeks, and continue to be cared for by the parents for a further two to three weeks. The family group may either break up at this time, or stay together through to at least February.

Daily feeding routines are influenced by tide cycles, with birds feeding on the falling or low tide, including at night. Reef herons are usually seen individually but may sometimes be found in small groups, especially when roosting at high tide.

Reef herons catch and eat small fish, crustaceans and worms. They move stealthily to catch their prey by surprise, and sometimes crouch with outstretched wings to create a shaded area underneath to entice prey within reach, which is then rapidly stabbed or grabbed. Other foraging techniques include moving carefully along the water's edge looking for prey, or using a foot to stir up the substrate in order to catch any prey so disturbed. Foraging reef herons generally ignore nearby birds of other species.

A medium-sized dark grey heron with a long, greyish-yellow bill, and greenish-yellow legs, that is uniformly dark in flight. An all-white form of reef heron also exists but is rare in New Zealand.