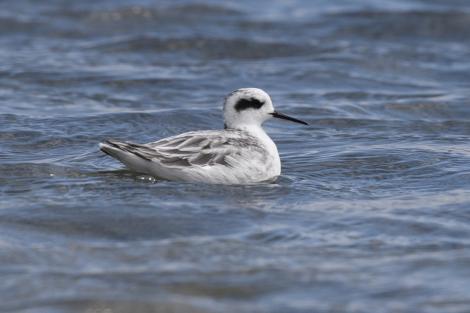 The three phalarope species are anomalous sandpipers that breed at mid to high latitudes in the northern hemisphere, and migrate to the southern hemisphere. They are unusual for their reversed sexual dimorphism and aberrant breeding systems (females are more colourful, and may leave two or more males to care for consecutive clutches), and in being highly aquatic.

Female phalaropes compete for nesting territories, court males, and aggressively defend their nest and mate. The chestnut red neck, from which the red-necked phalarope gets its name, is more vivid on the female than the male. This is because the smaller male incubates the eggs, so needs to be inconspicuous to avoid predators.

The red-necked phalarope is the smallest of the three phalarope species, and has the most extensive circumpolar breeding range. A wading bird of the open ocean, it lives virtually as a seabird most of the year, coming ashore to breed. After breeding on Arctic and subarctic tundra it migrates to seas off New Guinea and Indonesia, rarely reaching New Zealand. It has lobed toes used for swimming, and it feeds by spinning rapidly in a tight circle on the surface, stirring up small prey items that it feeds on. It also feeds on parasitic lice picked from the backs of whales. It sleeps floating lightly on the sea surface.

The red-necked phalarope is a small-headed, large-bodied wading bird with a long needle-like bill and lobed toes. In breeding plumage, adults have white throat patches and a predominantly dark grey head and back. The male has a paler underside than the female, almost entirely white, whereas females have a grey breast. Breeding females have a more vividly coloured chestnut red neck than the male. Non-breeding adult birds have pale silvery-grey upperparts, white face and underparts, and a small black patch behind the eye. Juveniles resemble non-breeding adults but also have a grey-brown wash on the nape, shoulders and upperwings, and a darker crown.

Voice: chep, cherre, whit and chik calls are given.

Similar species: The slightly larger, thicker-necked grey phalarope has a shorter, broader bill, often yellowish around the base. Non-breeding Wilson’s phalarope is larger, with a longer bill and no dark eye patch.

Red-necked phalaropes are annual circumpolar breeders in June-July on subarctic and Arctic tundra of North America and Eurasia. They usually breed farther inland and at higher elevation than grey phalaropes. After breeding, red-necked phalaropes migrate to the Arabian Sea and seas off New Guinea and Indonesia, and Ecuador and Peru. On migration they are often seen on small pools near coasts, and are sometimes blown onshore by storms. There are 12 accepted records of red-necked phalaropes in New Zealand.

The total global population of red-necked phalaropes is estimated at 3.6-4.5 million birds, with 100,000-1 million along the East Asian-Australasian flyway.

Red-necked phalaropes usually nest as solitary pairs, sometimes in loose colonies. The nest is a shallow scrape on the ground or sparse vegetation close to water, lined with grass. Four brown eggs with dark brown blotches are laid in June. The female abandons the male to incubate alone for 17-21 days. If enough male birds are available, females may mate with several. Chicks hatch well developed and are able to leave the nest after drying, and feed themselves. The male leaves the young after about two weeks. Juveniles are able to fly well 20-22 days after hatching and also migrate south.

At sea, sometimes associates with whales and northern sea ducks, which stir up food from the bottom while feeding. Phalaropes have also been seen gleaning parasitic crab-like lice from the backs of whales.

At sea, red-necked phalaropes feed on plankton and tiny fish caught at the surface, and parasitic lice pecked from the skin of whales. During the breeding season, they forage in and around shallow water, eating plant matter and invertebrates, such as insects, molluscs and crustaceans.

A small-headed, large-bodied wading bird with a long needle-like bill and lobed toes. Non-breeding adult birds have pale silvery-grey upperparts, white face and underparts, and a small black patch behind the eye. Juveniles resemble non-breeding adults but also have a grey-brown wash on the nape, shoulders and upperwings, and a darker crown.