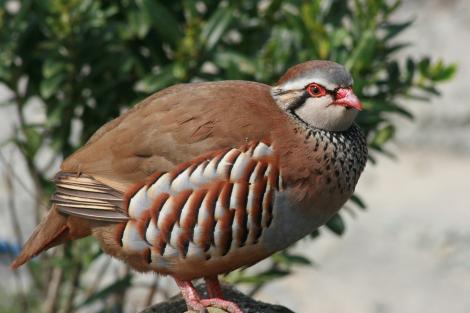 Red-legged partridges are not considered to be established in the wild in New Zealand. They are included here because ongoing releases of captive-reared birds mean that they may be seen as free-living birds, which are often confused with the closely-related chukor (Alectoris chukar). Any chukor-like bird seen in the North Island or in lowland areas of the South Island is more likely to be a red-legged partridge.

The red-legged partridge is a plump, bantam-sized gamebird with a grey-brown body and boldly-patterned head. It has a whitish stripe extending from just above the bill, over the eye to the ear coverts, and a prominent whitish chin patch reaching to the eye. The chin patch is bordered by a black stripe which grades below into a broad spangled black-and-white necklace. The forehead (above the narrow whitish frons) is grey merging into brown on the crown and nape. The belly is pale greyer, and the boldly-marked flanks are grey barred with white, black and chestnut. The bill and eye-ring are bright red, the eye is dark brown, and the legs are dark pink.

Similar species: red-legged partridges differ from chukor in being slightly smaller, browner (cf. grey on the back), having white above the bill (black in chukor), and having a spangled necklace where the chukor has a solid black line surrounding the whitish chin patch. Red-legged partridges also have more chestnut or brown among their flank stripes (these are mainly black-and-white in chukor, forming 8 or more zebra-like stripes).

No viable wild populations are known. Recently-released birds are mainly reported from South Auckland, northern Waikato and Hawke’s Bay. The local Fish & Game Council may know of releases occurring in other parts of the country. Birds are usually released into shooting preserves or on to rough farmland adjacent to areas of shrubland. As many released red-legged partridges are habituated to people, they can be quite approachable, and are often reported from gardens near release sites.

The natural range of the red-legged partridge is south-western Europe. They have been introduced into many countries, including England, Scotland, Greece, Algeria and the United States.

A total of 2138 eggs from British suppliers was brought into New Zealand in 1980-81; of these 203 hatched. The first birds were released east of Huntly in March 1984, with over 13,000 released from North Auckland to Canterbury by 1990. The numerous birds held by game farms (in 2015) are all descended from these original birds, with releases continuing (particularly in South Auckland). Despite the thousands of birds released, and some wild breeding occurring, red-legged partridges are not recognised as having a self-sustaining wild population established in New Zealand.

Over $300,000 was spent on attempts to establish red-legged partridges in New Zealand up to 1990, with the largest contribution ($217,549) coming from the Auckland Acclimatisation Society.

Breeding has not been described in the wild in New Zealand, although any unbanded birds seen are likely to have hatched from eggs laid in the wild. In Europe, most clutches comprise 10-16 eggs, which are about 41 x 31 mm, off-white with reddish or grey markings. The nest is a shallow cup lined with plant material, hidden under or among vegetation. Females may lay two clutches, incubating one themselves and leaving the other for the cock to care for independently and simultaneously. Incubation takes 23-25 days, and the chicks leave the nest as soon as they are dry.

Young are cared for in family coveys. Most New Zealand sightings are of single birds, but small coveys may be seen soon after birds are released. Males may perch prominently when calling (e.g. on fence posts and railings).

Red-legged partridges are predominantly vegetarian, foraging for seeds, roots and foliage plus a few invertebrates. Food is obtained by pecking at the ground and foliage, and by scratching in soil.

A plump, grey-brown gamebird similar to chukor but smaller and browner with different facial pattern, a speckled necklace (solid black in chukor), and more brown among the otherwise black-and-white stripes on the flank