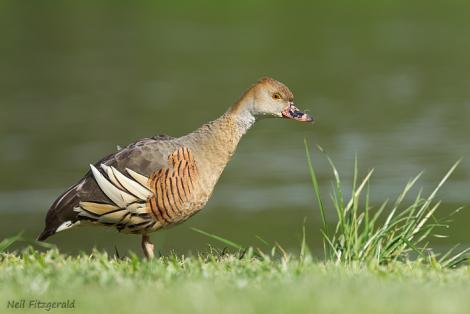 The plumed whistling-duck is one of two distinctive tree duck species common to northern and tropical Australia. It is the only whistling duck to have been observed in New Zealand, and is typically encountered in flocks. Tree ducks fly with their head lower than their back and with conspicuously trailing legs, and their noisy wingbeats making a whistling sound.

Whistling ducks stand erect and goose-like but are much smaller and slimmer than geese or shelducks. The plumed whistling-duck is predominantly pale fawn or buff with pale chestnut sides. It has very prominent, long and pale yellow flank feathers extending up almost onto the back. The bill is pink with dark freckles, and the legs and feet pale pink. The sexes are alike and of similar size.

Voice: plumed whistling-ducks give loud high-pitched whistles, and there is constant twittering within flocks.

Plumed whistling-ducks occur across northern Australia, throughout Queensland and into New South Wales, in the upper Darling River basin and Murray & Murrumbidgee catchments. Formerly considered of rare occurrence in New Zealand (approx. 8 times during the 20th century), small flocks have occurred at least 7 times since 2000. Most sightings have been of small flocks (maximum 14 birds) at the western edge of New Zealand, but birds have reached Hawke’s Bay (Anderson Park, Napier) and Chatham Island (2 different flocks of 3, both in 2011). The 3 Napier birds soon reduced to 2, one of which stayed until April 2021.

Plumed whistling-ducks are grassland grazers that feed much like a goose, on short grass swards. They will sometimes dabble in shallow water. They are not strongly associated with water, but tend to roost alongside water on bare ground. Roosting sites are often referred to as “camps”. They generally avoid coastal or tidal areas.

Nests are situated solitarily on the ground, usually in long grass. The 8-14 eggs are incubated by both sexes, for about 28 days. Both adults guard the ducklings until they fledge at about 56-65 days old.

Plumed whistling-ducks are highly gregarious and form large communal feeding and roosting flocks. However, adults appear to form long-term pair bonds, with partners remaining in constant contact within the flocks.

A distinctive, upright duck slightly smaller than a mallard, with large pale plumes on the flanks, a pink-and-black bill, and pink legs. Most New Zealand occurrences have been small flocks.