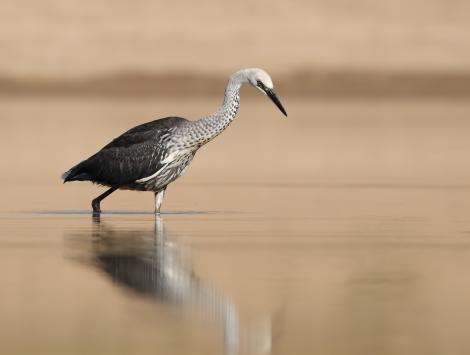 The name ‘Pacific heron’ implies that this is a far ranging bird, when in fact it is rarely seen beyond Australia and Papua New Guinea. It is a tall elegant bird, and similar in size and proportions to the white heron, and markedly larger than a white-faced heron. Pacific herons are common throughout Australia other than the arid interior, and regularly visit Tasmania and New Guinea. One was seen on Norfolk Island in 1978, and birds have reached New Zealand on at least twelve occasions.

The name ‘Pacific heron’ is preferred to the alternative ‘white-necked heron’, as the latter is also used for the cocoi heron (Ardea cocoi) of South America.

The Pacific heron is a large, long-legged bird with the long neck, small head and pointed bill, typical of all herons. The head, neck and breast are white except for a series of grey circular markings running centrally down the lower neck onto the breast. The back, upper wings and tail are very dark grey (maroon when breeding), and the under-wings are greyish brown. In flight a prominent white patch shows at the elbow. The bill, legs and toes are black. Flight is slow and laboured, on broad, rounded wings. The neck is folded back in flight, and the legs extend past the tail. The usual flying height is up to 50 metres, however Pacific herons use updrafts to soar and glide to much greater heights.

Similar species: partially leucistic white-faced herons can have entirely white heads and necks, but are much smaller and paler birds compared to the big, blackish (other than head and neck) Pacific heron.

Pacific herons are found in wetlands, lakes, rivers, swamps or boggy grasslands throughout most of Australia most notably in the Murray-Darling River system. They prefer freshwater locations but occasionally can be found in estuarine areas. Pacific herons migrate to otherwise arid inland areas if heavy rain events create temporary lakes and wetlands. They also use farm dams, irrigation channels or roadside drainage ditches.

Pacific herons are most often seen as singles or in pairs, but can form flocks when moving inland to areas that are flooded after rain. They breed in colonies, often with other heron species, ibises or spoonbills. They can be aggressive when foraging, defending a feeding territory. When foraging, Pacific herons walk at a steady pace, then hesitate with neck extended before lunging at prey.

Pacific herons eat a range of small aquatic and terrestrial animals, but surprisingly, they rarely take fish. Their diet includes insects, molluscs and crustaceans, and they may make use of a hard surface to smash a shell or carapace against to access the meat. Pacific herons glean insects from foliage, and are often seen parting grasses or reeds in search of food. They sometimes steal food from other birds, and will eat carrion.

A large heron with a pointed black bill, long black legs, and a white head, neck and breast with grey circular markings running down onto the breast. The back, upperwings and tail are very dark grey, and the underwings are greyish brown.