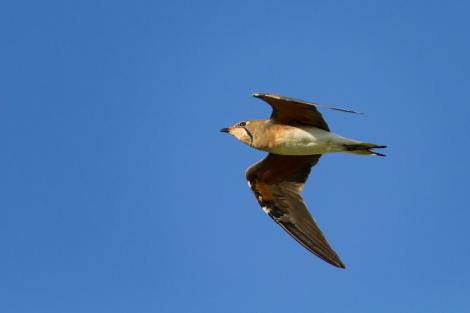 Oriental pratincole. Side view in flight. Broome, Western Australia, January 2015. Image © Ric Else by Ric Else

The oriental pratincole is an atypical wader, a bit larger than a banded dotterel. It is sandy brown above, paler below, with a white rump and black primaries and tail. The buffy throat is edged by a thin black band. The underwings are chestnut. The bill is short and black, with red at the base. The legs are slim and dark, of medium length. Juveniles are mottled above, with wide buff tips with dark sub-terminal bands to feathers of the upperparts, and lack the black throat band. Oriental pratincoles are graceful in flight, and feed mainly while flying.

Similar species: none in New Zealand.

The oriental pratincole is a rare vagrant to New Zealand with about a dozen records. It is widespread in East Asia. Most spend the non-breeding season in Australia, where an amazing 2.88 million were reported in February 2004. Oriental pratincoles prefer open habitats, such as grassland and farmland, over which they hawk for insects.

The oriental pratincole population was thought to be only about 75,000 birds until an enormous non-breeding population was discovered in Northwest Australia in 2004. The population is now estimated at about 2.8 million birds.

The apparent increase in numbers is a result of difficulties in assessing the population, not a result of changing conservation status.

Oriental pratincoles breed in colonies in Asia, from Pakistan through to north-east China. They lay 2-3 eggs on bare ground in open areas.

Pratincoles are usually gregarious in flocks of up to 40-50, although the largest group in New Zealand was ‘at least 5’ near Nelson in 1959. Most New Zealand records are of single birds.

Oriental pratincoles feed mainly on flying insects (e.g. moths, termites, beetles), but at times of grasshopper plagues they will catch prey by running on the ground. They often forages in flocks, exceptionally of up to 25,000 birds.

A slender wader that is sandy brown above and paler below with a white rump, black primaries and tail, a buffy throat edged by a thin black band, chestnut underwings, a short black bill with red at the base, and slim dark medium length legs. They are graceful birds that appear tern-like in flight, especially when feeding.

Flock of 500+ feeding on grasshoppers