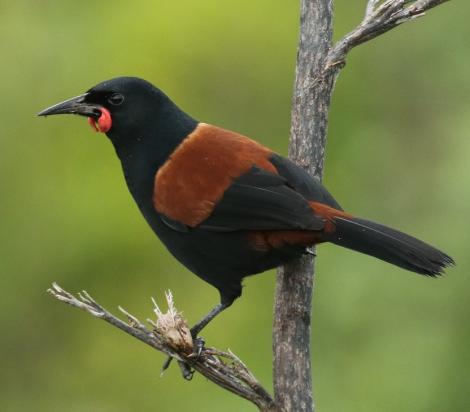 North Island saddlebacks are conspicuous and easily observed in regenerating scrub, forests and coastal forests. They call frequently, particularly in response to disturbance, and are very active, noisy foragers. They are about the size of a European blackbird. Saddlebacks were widespread at European contact, but rapidly declined on the mainland following the introduction of predatory mammals, especially ship rats and stoats. By the early 1900s, North Island saddlebacks were confined to a single population on Hen Island (Taranga) off the northeast coast of the North Island. A series of successful translocations was initiated by the New Zealand Wildlife Service in the 1960s. There are now 18 island populations, including the natural population on Hen Island, a population established through natural dispersal on Coppermine Island, and 16 translocated island populations, plus another six at predator-fenced mainland sites.

North Island saddlebacks have striking black plumage, a rufous chestnut saddle across their back, bright reddish-orange wattles (that get larger with age) and a thin pale yellow band on the leading edge of the saddle. Sexes are alike, although males usually have larger wattles than females of the same age. Juveniles are similar but their plumage lacks the sheen of adults, with dusty brown tips on black body feathers, the gold band is absent, and they have small wattles.

Voice: a loud chattering call cheet te-te-te-te is uttered throughout the day. Territorial male birds sing male rhythmical song which is characterised by 2-4 introductory chips followed by a series of highly stereotyped and repeated phrases. Over 200 different types of male rhythmical song have been recorded, with song diversity and distribution correlating with translocation history. Male and female birds also give sexually dimorphic quiet calls which are very soft and flute like.

North Island saddlebacks can be very abundant in suitable habitat free of introduced mammals. Recent population estimates suggest there are more than 7000 birds across all populations. However, many of the island estimates are not based on formal counts and the actual number is likely to be much higher.

Cavity-roosting and nesting behaviour makes North Island saddlebacks extremely vulnerable to predation by introduced mammals, especially stoats. Therefore, they can only exist at sites where exotic mammalian pests are either completely excluded or are at zero density. Translocation has been essential for the conservation management of North Island saddlebacks (see Distribution).

Typically spring and summer breeders. Female North Island saddlebacks build a cup nest of vegetation in tree cavities, rock crevices, tree fern crowns, epiphytes and in dense ground level vegetation. Artificial nest boxes are used on some islands. The clutch size is 1-4 and they can rear up to four broods in a season (typically 1-2 in established populations). The female incubates and broods but both parents feed and care for young.

North Island saddlebacks are extremely active foragers utilising the forest floor to the canopy. They often have other species in attendance whilst feeding, particularly fantails and whiteheads. They use their bill as an anvil to chip away at rotten wood, investigate under cabbage tree skirts and epiphytes, burrow into leaf litter and glean branches, trunks and leaves. They are relatively weak fliers but have very stout legs that are used whilst feeding and for bounding through vegetation.

A medium-sized black songbird with a chestnut-coloured saddle across the back, fleshy reddish-orange wattles at the base of the bill, a pointed black bill, and a thin gold band on the leading edge of the saddle. Juveniles are similar but the gold band is absent, and they have small wattles.