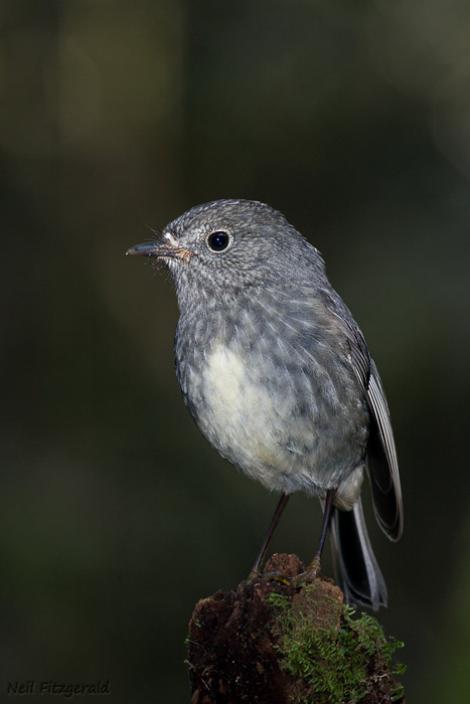 The North Island robin occurs in forest and scrub habitats. It can be recognised by its erect stance and relatively long legs, and spends much time foraging on the ground. It is a territorial species, males in particular inhabiting the same patch of mainland forest of 1-5 ha throughout their lives. Male are great songsters, particularly bachelors, singing loudly and often for many minutes at a time. Where robins are regularly exposed to people, such as along public walking tracks, they become quite confiding, often approaching to within a metre of a person sitting quietly. Naïve juveniles will sometimes stand on a person’s boot.

Male North Island robins exhibit delayed plumage maturation whereby the plumage becomes darker at each of the first 2-3 annual moults. Males at independence are a light grey or dark grey colouration, like females. Most males achieve adult colouration (generally dark grey-black) at their second moult when 19-22 months old, but a small proportion take another year before becoming blackish, and a few seem to remain dark grey throughout their lives. Males breed successfully whether they are light grey (< 12 months old), dark grey or blackish. Many contour feathers of North Island robins have pale shafts and this gives the species its faintly streaked appearance. Both sexes have a pale grey-white patch over the lower chest-belly, and are able to expose a small white spot of feathers above the base of the beak during intraspecific and interspecific interactions.

Voice: North Island robins have four recognisable vocalisations. Fullsong is a series of phrases given loudly by males only, generally from a high perch. Robins can be heard giving fullsong year round, but particularly during the breeding season. It is used to indicate territorial occupancy and to attract a mate – bachelors spend much more time singing than paired males. Subsong is similar to fullsong but given at much less volume, is given by both sexes, and most frequently during the moult. The downscale is a series of very loud ‘chuck’ calls, descending in frequency, and which start in rapid succession and finish slowly. The call lasts 3-4 seconds, is given by both sexes, and is most frequently heard in the non-breeding season (Jan-Aug). The fourth vocalisation type is the ‘chuck’, which is given as single notes (contact calls) or in rapid succession and loudly (alarm call) when a predator is present.

Similar species: there is no similar species to the robin in North Island forest. It is much larger and lacks the white wing-bars of the tomtit.

This robin is restricted to the central North Island from Taranaki to the Bay of Plenty, plus Little Barrier and Kapiti Islands. Several populations beyond these areas have been established by translocations. Robin distribution can be quite patchy even within extensive blocks of mature native forest. A comparison of the Ornithological Society of New Zealand’s atlas scheme results of 1969-79 and 1999-2004 indicate that the North Island robin’s distribution in the central North Island has changed little during the 20 year interval. However, as a result of translocations its distribution has been enhanced with the establishment of populations on some pest-free islands and in pest-controlled mainland sites.

Robins occur in mature forest, tall scrub, and exotic plantations, particularly those that are fairly mature and have patches of shrubs as an understorey. They seem to favour moist areas where there is an open understorey under a closed canopy.

Formerly widespread over the North Island, robins are now restricted mainly to extensive forest blocks in the centre of the island. It is patchily distributed through this area, being absent from seemingly suitable areas and common in others. Pairs have territories of 1-5 ha, although populations on pest-free islands can occur at much greater densities (0.2-0.6 ha / pair).

Forest clearance for farmland during the 19th and 20th centuries resulted in loss of habitat of the North Island robin. Today the main threat to its conservation is predation by introduced mammalian predators, such as feral cats, stoats, possums, and particularly the ubiquitous and arboreal ship rat. Eggs, nestlings and adult females (which carry out incubation and brooding of young at night) are frequently preyed upon where predators are not controlled. As a result populations become male biased. Where pest control is carried out, populations increase rapidly, and the sex ratio returns to almost 1:1 within a few years – there are usually a few more males than females.

North Island robins start nesting in September. The female builds the nest, the male bringing her food 2-3 times per hour. Many nests are sited against tree trunks; in trunk forks, at trunk-branch junctions, on epiphytes next to trunks. Only females incubate, their clutches usually consisting of 2-3 eggs. Her mate calls her from the nest every 20 minutes or so to provide her with food. Once nestlings are more than 5 days old, males take all food to their broods rather than to their mates. Nestlings leave the nest when about 3 weeks old, and continue to be fed by their parents for a further 5-6 weeks.

Male robins are territorial year round, although their aggression towards intruders is subdued during the moult. Pairs remain in their territories most of the time, occasionally sneaking into neighbouring territories to feed or go elsewhere to drink and bathe. Males dominate their mates during the non-breeding season, such that pair members are usually found apart. Some females change mates, which has occurred during the breeding season and non-breeding season. Females have left their mates after successfully fledging a brood (male rears the fledglings) and after predation of eggs or nestlings.

Robins use a variety of activities to flush hidden or camouflaged prey, such as foot trembling, wing-flicking and tail-flicking. Occasionally they capture relatively large prey. These are killed, dismembered, and some portions are often cached. These are usually retrieved later the same day or the following one.

While robins spend much time foraging on the ground, in tall forests they also forage over trunks and branches, especially those that are covered in epiphytes, such as mosses. Much of their diet consists of invertebrates, and they also eat small ripe fruit in summer and autumn, particularly during drought when few soil-dwelling invertebrates are available.

A small songbird that is light-grey or dark-grey to blackish with a pale grey-white patch over the lower breast-belly, and with many of the contour feathers having pale shafts which give this species a faintly streaked appearance. Adult birds are also able to expose a small white spot of feathers above the base of the bill.