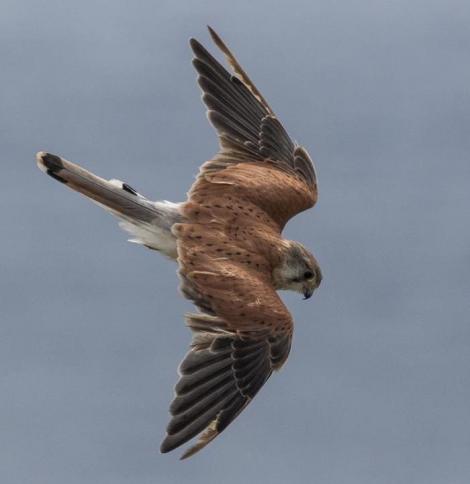 The nankeen kestrel is a diminutive Australian raptor that is a vagrant to New Zealand. Having more slender, long pointed wings, it is more of a specialist open habitat/farmland species than our native falcon. Most well-known for its characteristic hovering hunting flights, it feeds on insects, small birds and mammals such as mice and rats. Records are widely spread throughout the New Zealand mainland. Despite sporadic irruptions in numbers the nankeen kestrel has never been recorded breeding in New Zealand.

The name 'nankeen' refers to the similarity in colour of the kestrels back to the yellowish-brown cotton found originally around the Chinese city of Nanking, once used to make buff-coloured cotton trousers.

A tui-sized small raptor with long slender, pointed wings. Pale rufous/chestnut brown back with black triangular spotting, black flight feathers and a cream/white streaked breast. Small sharply hooked bill with an understated moustache/malar strip running vertically down from the back of the gape. Distinctive black subterminal band at the end of a long rectangular or fanned tail. Adult males have a grey head and tail, are sparsely spotted on the back, and are more rufous than females. Adult females have brown heads and tails, and are more heavily spotted on the back than males. Juveniles are similar to adult females, but with a less chestnut shade of brown and heavier triangular spotting on the back. The hovering flight, with angular crooked wings is characteristic.

Nankeen kestrels occur throughout the Australian mainland, but are uncommon non-breeding visitors to Tasmania. They are partial migrants to North Australia and Indonesia in the winter. Kestrels have bred on Lord Howe Island since 1944 and Norfolk Island since c.1971. Vagrants to New Zealand have been recorded in most regions, where they prefer open grasslands and scrubland.

Relatively frequent visitor to New Zealand. Records dating back to late 1880s are widely distributed over both main islands. Arrivals are usually of individual birds however sporadic irruptions in numbers occur, e.g. observations were made from nine locations in 1969 and 13-15 birds spread between Hokitika and Cambridge were recorded in 1990. Boom and bust population trends of prey influence productivity, and may be a factor in the numbers arriving in New Zealand, as could drought conditions, large bushfires and prevailing weather conditions. Despite multiple birds being present at one time, including two birds observed together in Hawke's Bay for five years in the 1980s, there has been no indication that kestrels have bred in New Zealand.

Quartering flights interspersed with hovering are used to search for prey in open habitats. Kestrels also hunt from a perch using a glide attack, sometimes resulting in a tail chase. Overseas they most often nest in trees, in cliff cavities or in stick nests of other birds. They will occasionally nest on the ground or on buildings. The absence of medium-sized stick nest making birds in New Zealand and a general lack of tree cavities may be factors that restrict the ability of this species to breed here.

A small raptor with long pointed wings, rufous-chestnut back, black flight feathers, cream-white streaked breast, black band at the end of long tail, small hooked bill, and a faint moustache stripe below each eye. Males have a grey head and tail and black spotted back; adult females have brown heads and tails, and are more heavily spotted.