Geographical variation: Often treated as a subspecies of the imperial shag L. atriceps. Many authors place all shag and cormorants in a single genus Phalacrocorax. 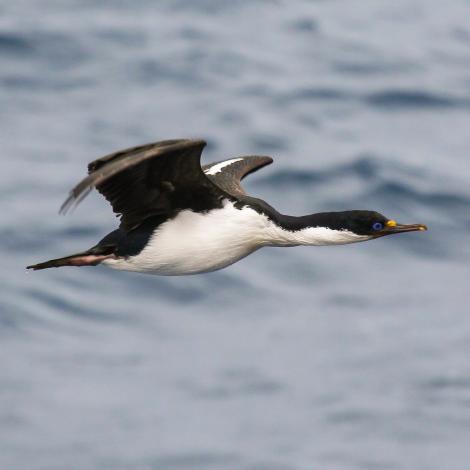 The Macquarie Island shag is one of the ‘blue-eyed’ group of shags that are found in southern South America, the Antarctic, and islands of the southern Indian and Atlantic oceans. It is the only shag species found on Macquarie Island, where it lives all year round feeding in inshore waters. Macquarie Island is one of the few areas on the earth where upper mantle rocks are exposed at the surface, and is located approximately halfway between New Zealand and Antarctica at 54°30'S, 158°57'E. The island has a total area of 128 km2 and reaches an elevation of 410 m.

The Macquarie Island shag is a medium-sized, black-and-white marine shag. Breeding adults have glossy black on the top and sides of the head and hindneck, with a black crest on the forehead. The boundary between the black cap and white face starts at the gape and extends back below the ear-coverts, giving the face a dark appearance. The upper wing coverts are dark brown with a green sheen. The tail is black. The throat, sides of the neck, and remaining underparts are white. The bill is grey with a prominent pair of orange caruncles above the base of the bill. The eye-ring is blue, the iris brown, and the facial skin is orange-brown, speckled with yellow. The feet are pink to purple-grey. The sexes are alike. Juveniles can be distinguished by their brown colouration rather than the blackish-brown of adults.

Similar species: the nearest population of a related species is of the Campbell Island shag, which differs in having a dark throat, and lack of facial caruncles.

Macquarie Island shags are endemic to Macquarie Island and Bishop and Clerk islets, which lie 33 km to the south. They are mainly sedentary, and are restricted to inshore waters. However, two were collected at the Auckland Islands in July 1901.

There has probably been a recent decline in this species on Macquarie Island with only 472 breeding pairs counted from 11 sites in October 2003 compared to 660 at 19 sites in the 1970s. A further 100 breeding pairs were recorded from Bishop Island and Clerk Island in the 1970s.

Feral cats have been eradicated from Macquarie Island, and it is likely that ship rats have been also, following aerial application of poison baits in July 2011. Both were likely predators of Macquarie Island shag eggs and chicks. Subantarctic skuas take some eggs and chicks, however, the harsh climate of the Southern Ocean is the biggest cause of mortality. Storms have been known to kill 90% of chicks and can also cause mortality amongst adults. Long periods of stormy conditions can also result in starvation because birds cannot forage.

Macquarie Island shags are colonial breeders building their nests 1-2 m apart on exposed rocky shores and stacks. The nest is a low, cone-shaped structure made of vegetation (grasses and algae) cemented with guano and mud. Males occupy a nesting site and display to attract females. A variety of elaborate postural displays, similar to those described for other pink-footed shags, are performed during pair-bonding and during changeover at nests. The 1-3 blue-green eggs are laid between September and January (peaking in the second half of October) with chicks hatching in December and fledging in late January to mid-February. Replacement clutches are laid if the first clutch fails. Fledgling success rates are difficult to estimate as juveniles move from the nest site before they become independent, but hatching rates of 60% (1.0-1.9 chicks per nest) have been recorded. Birds do not breed until they are 2-4 years old. Young birds usually remain together for only a single breeding season, although more experienced pairs remain together longer.

Macquarie Island shags are sedentary and are restricted to inshore waters. They may form large foraging flocks (up to 300 individuals) outside the breeding season. Birds roost in small or large flocks on bare ground during the autumn and winter.

A large, black-and-white marine shag with a black head crest, blue eye-rings, pinkish feet, brownish facial skin, and orange caruncles on each side of the bill. An extensive white throat and black upperwings each with a white alar bar distinguish it from other shag species.