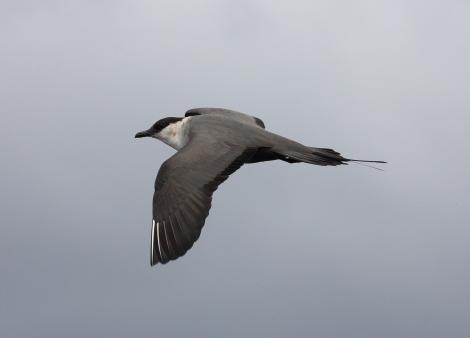 Skuas are strong-flying piratical seabirds allied to gulls. The long-tailed skua is the smallest of the three holarctic-breeding skua species that regularly visit New Zealand. Up to 5 have been recorded during the austral summer before migrating to Arctic and subarctic breeding grounds. Most records of these highly pelagic birds come from the North Island. They are more solitary than Arctic skuas, and feed on the surface more often than they pirate food from other seabirds. They often dip to the surface like a tern.

A small, slim, lightly-built skua with long, tern-like narrow wings and a small head and bill. It has two very long, flexible, tapering tail-streamers, hence its common name. Plumage changes occur with ageing, similar to other skuas. Pale adults are more usual in New Zealand than the dark and intermediate morphs. All have grey upperparts, contrasting dark primaries and white wing flashes. Dark adults are rare and poorly known. Non-breeding adults either lack or have only short, pointed tail-streamers. Cheeks, throat, breast and flanks are darker giving a hooded effect and the tail is barred. Juveniles and immatures are paler and greyer than Arctic skuas with short tail-streamers, two white primary shafts on each wing, and more heavily barred underwings and tail. The sexes are alike.

Similar species: the long-tailed skua is the smallest of the three holarctic-breeding skuas. that migrate to New Zealand waters. Arctic skua is more falcon-like with a triangular looking head and more rounded belly. One quarter heavier, it mainly pirates food from other seabirds. Pomarine skuas are twice as heavy with larger bill, head, neck and chest, and more direct, heavier flight. All three species have long tail-streamers when breeding but with wear and moult these become short or absent during the non-breeding period. All have dark, pale and intermediate forms with juvenile, immature and adult breeding and non-breeding plumages. There are 36 potential plumage variations to sort through when identifying birds at sea, hence the importance of noting differences in flight and behaviour. Long-tailed skua is more tern-like with more buoyant flight, relying more on surface feeding. Pomarine skua has slower, more direct flight with heavier wing beats, resembling a larger gull. Most Arctic skuas are dark, and are larger and more falcon-like than long-tailed skuas.

World population is estimated at between 150,000 and 5 million individuals. In New Zealand there are no records in some years and up to five records in others.

Circumpolar breeder from subarctic to high Arctic on dry or montane tundra up to 1,300 metres above sea level. Breeds singly or in loose colonies. Migrates south during September to southern subtropical and temperate oceans for the austral summer. A few visit the south-west Pacific each year, including Australia and New Zealand. Monogamous; 1-2 eggs, laid in a shallow plant-lined nest on ground. Breeding period June-August. Females incubate more than males. Incubation 24 days. Chicks stay in nest 1-2 days after hatching. One parent, usually female, remains near nest while other forages. Male usually brings and regurgitates food; female feeds chick. Young often remain with parents 1-3 weeks after fledging at 22-27 days.

Highly pelagic migrant, rarely within sight of land outside the northern Arctic breeding season. Feeds at sea surface, also hovers and dips, tern-like. None of the birds seen in New Zealand waters were recorded pirating food from other seabirds. Longevity 8 years.

Mainly feeds on small fish taken from the sea surface. Recorded pirating food from a silver gull and a grey-faced petrel in Australia, but apparently does so less frequently than other skuas do. During the breeding season they kill small mammals such as lemmings and smaller birds of the Arctic tundra.

A relatively slim, lightly-built skua with long, tern-like narrow wings and a small head and bill. Its dark cheeks, throat and breast give a hooded effect and non-breeding adults lack the tail-streamers of breeding birds.