Geographical variation: Twelve subspecies are recognised, but the identity of those introduced to New Zealand has not been determined 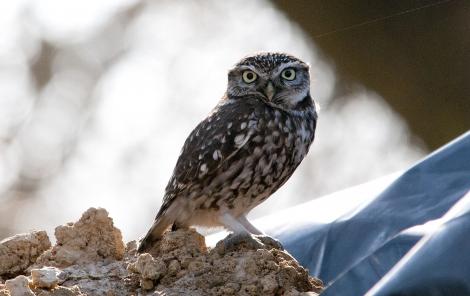 The little owl is a small grey-brown-and-white streaked owl that is widespread throughout the drier open country of the eastern and northern South Island. Unlike the morepork, they are often seen perched out in the open during the day. Little owls were introduced to New Zealand from Germany between 1906 and 1910, with the intention that they would help control the numbers of small introduced birds, which were becoming a pest in grain and fruit crops. With the exception of one pair released in Rotorua, all were liberated in the South Island. Little owls bob up and down if startled and have an undulating flight pattern.

Little owls are small, plump grey-brown owls, much streaked and spotted with white. They have pale grey facial discs either side of their face just below the eyes, and prominent white bands above the bright yellow eyes and below the chin. The legs have thick white feathering all the way down to the pale yellow-grey toes. They are more active during the day than moreporks, and are often seen perched in the open during daylight hours, on power poles, fence posts, roof-tops or in trees.

Voice: the distinctive ‘kiew’ contact call of the little owl is a common evening sound throughout lowland Nelson, Marlborough, Canterbury, Otago and Southland.

Similar species: the little owl is slightly smaller and much paler than the morepork. The little owl also has a shorter tail and a more flattened top to its head. The two species rarely occur in the same sites and habitats, as moreporks are scarce or absent from much of the dry, open farmland of eastern and northern South Island, and little owls do not live in forest.

Little owls are restricted to the South Island. They are widely distributed throughout the drier eastern areas and are more common towards the coast. They are also found in the Nelson region, but are rare on the West Coast. They inhabit farmland and urban areas, often around farm buildings, small stands of open trees and hedgerows.

A total of 219 little owls were imported and released by the Otago Acclimatisation Society between 1906 and 1910. Additional birds were released in the Canterbury region around the same time. They spread rapidly, and are common throughout the eastern South Island.

Little owls were introduced with the intension that they would limit populations of introduced finches and sparrows, and thereby reduce crop damage. There is no evidence that they have been effective in this, nor are little owls considered a significant threat as a predator to any native bird species. They are a major predator of the endangered Cromwell chafer beetle (Prodontria lewisi), and may limit the beetle’s population. The largely non-overlapping distributions of little owl and morepork are suggestive of competitive exclusion. This may be driven more by habitat preferences than direct interactions, but this has not been studied.

Breeding occurs during the months of October to January. It is generally a cavity nester and will use trees, stacked hay bales, old buildings, banks or rocky crevices. The female is solely responsible for  incubation of the 2-5 white eggs, which takes about 28 days. The chicks leave the nest after about 33 days.

Little owls are solitary and are most often seen perched in the open in the late afternoon. They mainly hunt at dawn and dusk, often feeding on the ground, where they walk and run freely (unlike morepork).

A small, plump grey-brown owl with white streaks and spots, pale grey facial discs either side of their face below the eyes, and prominent white bands above the yellow eyes and below the chin. The legs have thick white feathering down to the pale yellow-grey toes.