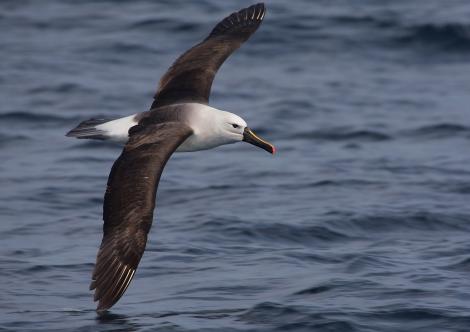 This small black-and-white mollymawk is one of the most endangered albatross species due to the number of birds caught and drowned on hooks set in commercial longline fisheries, globally. It has an estimated global population of 41,580 pairs, equating to perhaps more than 160,000 individuals in all age classes. One or two pairs breed in the New Zealand region, at The Pyramid in the Chatham Islands. Solitary or gregarious at sea in the Indian Ocean, they follow fishing vessels in large numbers to scavenge discarded fish offal, and feed on fish, squid and crustaceans. Outside the breeding season most birds disperse to seas off southern Africa and Australia, as far east as the Tasman Sea and north-eastern New Zealand waters.

The Indian Ocean yellow-nosed mollymawk is the smallest mollymawk species. It has a small head, slender neck and body, and a long slender black bill with a thin bright yellow stripe along the top, grading to pinkish-red at the tip. The back, upperwings and tail are dark grey, and the head, neck, underparts, underwings and rump are white. In fresh plumage there may be pale grey on the cheeks and nape. There is a small downward pointing triangle of black in front of and below the eye, and a white crescent behind it. The facial markings and black-brown iris give adult birds a "severe" look. The underwings are tipped with black and have a narrow black margin at the leading edge. The legs are pale blue-grey and the feet have pinkish webs. The sexes are alike, with juveniles having a white head and an all-black bill.

Indian Ocean yellow-nosed mollymawks breed on subantarctic islands in the southern Indian Ocean: Amsterdam, Crozet, Kerguelen, St Paul Islands (French Southern Lands) and the Prince Edward Islands (South Africa). One or two pairs have bred on The Pyramid in the Chatham Islands since 1998. Outside the breeding season, birds disperse throughout the southern Indian Ocean between 37-47°S. Most birds disperse to seas off southern Africa and south-western Australia, with a range extending east to the Tasman Sea and north-eastern New Zealand. Both adults and juveniles occasionally occur in New Zealand waters during winter off eastern Northland and in the Hauraki Gulf and Bay of Plenty in the North Island, and off Golden Bay and the Kaikoura Peninsula in the South Island.

Total world population of Indian Ocean yellow-nosed mollymawks is estimated at 41,580 pairs, or 83,160 mature individuals, equating to possibly more than 160,000 individuals in all age classes. The number of birds visiting New Zealand waters has declined greatly since the 1980s, when they were the most frequently observed mollymawk species in the outer Hauraki Gulf in winter.

The Indian Ocean yellow-nosed mollymawk is listed as Endangered (A4bde) by the IUCN Red List on the basis of an estimated very rapid ongoing decline over three generations (71 years). This decline is the result of the number of adult birds drowned and killed as bycatch in commercial fisheries, poor recruitment, and disease. The Amsterdam Island population declined after outbreaks of diseases in the early 1980s. Interactions with commercial longline fisheries could also account for observed decreases given that up to 600 may be killed annually. During the breeding season, birds are caught and killed in tuna longline fisheries in subtropical waters and longline fisheries that target Patagonian toothfish around the Prince Edward Islands. Birds are also killed in pelagic longline and trawl fisheries off southern Africa. There has been one report of a bird caught on a demersal longline set off the east coast of the lower North Island, New Zealand. The Department of Conservation classifies it as a coloniser in New Zealand that is threatened overseas.

Indian Ocean yellow-nosed mollymawks nest in dense colonies of up to 23,000 pairs, on vegetated or rocky cliffs. Colonies are mixed with black-browed and grey-headed mollymawks at Kerguelen Islands, and with Moseley's rockhopper penguins at Amsterdam Island. Elaborate courtship displays include aerial activity, croaking, bill-kissing, bill-clashing, bowing, scooping, and mutual preening. Indian Ocean yellow-nosed albatrosses are monogamous with long-term pair-bonds. The single large white egg with brown mottling or blotches is laid in September or October. The nest is a cylindrical cone of mud and grasses 30-60 cm high, usually located on rocky cliffs or in depressions or ravines among tussock, or under scrub near open spaces. Incubation of 71-78 days and chick-rearing of 130 days are shared by both parents. Birds arrive at colonies in August, and mate in September. Eggs hatch in November or December, and chicks fledge in March and April. The average age at first breeding is 9 years.

Indian Ocean yellow-nosed mollymawks breed annually, either singly or in loose or dense colonies. They are solitary or gregarious at sea, where birds follow fishing vessels in large numbers to scavenge discarded fish offal. Satellite-tracking of birds at Amsterdam Island shows breeding adults forage up to 1500 km from the colony.

Indian Ocean yellow-nosed mollymawks feed on fish and squid, and less frequently on crustaceans. They catch prey by surface seizing and shallow diving.

A small albatross with small head, slender neck and body, long slender black bill with yellow along the top grading to pinkish-red at the tip, a small downward pointing triangle of black in front of and below the eye, and a white crescent behind it. The back, upperwings and tail are dark grey, and the head, neck, underparts, underwings and rump are white.

Calls from birds on colony