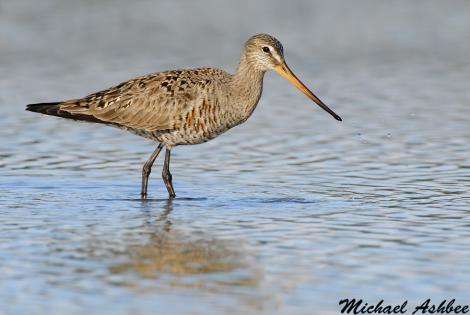 Godwits are four species of large, long-billed, long-legged wader that breed in the Northern Hemisphere. The Hudsonian godwit is a North American species that undertakes a long-distance migration from the Arctic to southern South America. A small number migrate in the wrong direction, reaching Australasia and the Pacific Islands in very small numbers. Here they are mainly found among large flocks of bar-tailed godwits. Very occasionally they can be seen alongside the very similar black-tailed godwit (also a vagrant species in New Zealand). These two ‘black-tailed’ godwits mainly differ in the colour of their underwing, which is diagnostically dark (almost black) in Hudsonian godwit.

The Hudsonian godwit is a large greyish-brown wader with a long, slightly upcurved , bi-coloured bill; long black legs and long wings. In winter plumage it is greyish-brown above and white below and looks very similar to the common bar-tailed godwit and almost identical to the slightly more numerous black-tailed godwit. In breeding plumage it has dark upperparts spotted with white, and rich chestnut-red underparts with an intricate pattern of black and white barring on the belly and flanks. Hudsonian godwits are easily identified when they stretch and lift their wings. The pattern of black tail, conspicuous white rump and broad white wing bar contrasting with darker wing feathers separates them instantly from the drab brown bar-tailed godwits. To distinguish Hudsonian godwits from black-tailed godwits the under-sides of the wing must be clearly seen – the forward part of the underwing is blackish in Hudsonian godwit but white in black-tailed godwit.

Hudsonian godwits breed in coastal or riverine wet meadows and marshland in Alaska, north-west Canada and Hudson Bay. After breeding, they undertake a rapid long-distance migration to Argentina and Chile and are rarely seen elsewhere in the Americas. In the non-breeding season they prefer estuaries, coastal wetlands and wet grassland. The global population of black-tailed godwit is estimated at c.70,000 birds. A tiny number, usually less than 3 birds, reach New Zealand annually.

The Hudsonian godwit was first recorded in New Zealand in 1902 at Lake Ellesmere and has subsequently been recorded from many localities throughout the country, including Chatham Island and Campbell Island. In New Zealand they tend to occur on inter-tidal mudflats and coastal lakes and usually associate with bar-tailed godwits. Occasionally two birds will occur together but the vast majority of sightings in New Zealand are of lone birds.

In New Zealand, Hudsonian godwits tend to forage and roost amongst flocks of bar-tailed godwits where they go un-noticed until an individual raises its wings or takes flight. Their feeding behaviour is much like that of their far more abundant cousin, where they walk over mudflats, wade in shallow water and find most of their prey by deep probing in soft sediment.

In estuarine habitats Hudsonian godwits feed mainly on marine worms, shellfish and crabs. On grasslands they forage for earthworms and insect larvae. No New Zealand data.

A large long-legged greyish-brown wader with a long, slightly upcurved pink bill with black tip, long black legs and long wings. The forward part of the underwing is blackish.