Geographical variation: There are six subspecies spread throughout the tropical and sub-tropical parts of the world. The Australian form macrotarsa (= Australian tern) visits New Zealand periodically. The Asian form affinis is regularly seen in Australia and could potentially occur here too. 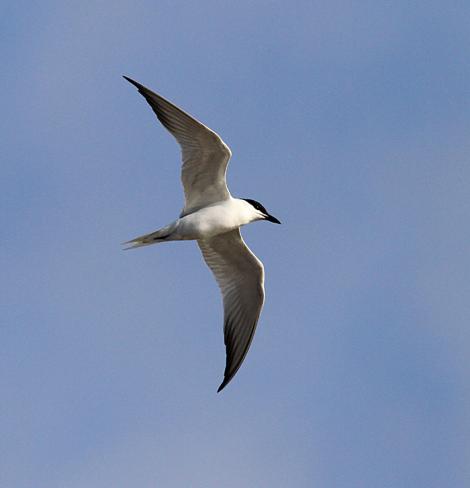 Gull-billed terns are mainly birds of the Australian interior, appearing and breeding, often in large colonies, on temporary water left by floods. Like many Australian wetland birds, they are long-lived and well able to cope with the climatically-induced variable breeding conditions of the interior. Gull-billed terns and other wetland birds are forced to find new habitats when the temporary wetlands are consumed by drought, and it is during post-flood droughts that gull-billed terns are likely to reach New Zealand. There is also a smaller, migratory Asian subspecies (affinis) that reaches Australia as part of its non-breeding range. This could overshoot and reach New Zealand too, but it has not yet been recorded here.

The gull-billed tern is a large, heavily built and thick-billed tern, with characteristically long legs. The back and upper wings are a very pale grey while the tail, body and under wings are white. The upper wings may have dark grey feathers on the outer leading edge of the primaries and there is a dark grey trailing edge to the lower surface of the outer primaries too. This darkens and becomes more conspicuous as the feathers wear. Adults in breeding plumage have a solid black cap from the base of the bill extending to just below the eye and well down the nape. In nonbreeding plumage there is a very large black eye patch and the crown and nape are lightly streaked or washed with grey. Sub-adult birds have a head pattern like a non-breeding adult but also have a more extensive dark bar along the trailing edge of the wing and may have other dark markings on upperwing, but the heavily speckled backs of newly fledged birds are unlikely to be seen in New Zealand. The bill, legs and eye are black.

Gull-billed terns fly with slow, steady wing beats, swooping to snatch prey from the ground. This dropping and rising flight is fairly distinctive, and they may also hawk insects in the air. Unusually for a tern, their long legs enable them to walk easily and even run, and so their stance may show some resemblance to a small gull.

Voice: gull-billed terns are generally silent except near breeding colonies, where most calls are given in response to intruders – normally a staccato guttural gek-gek-gek.

Similar species: gull-billed terns have a heavy build like a Caspian tern, but are much smaller (with the body length of a white-fronted tern) and have a black, rather than orange bill. They are as pale on the back as a white-fronted tern, but are markedly heavier in the body and bill, with much longer legs. In flight gull-billed terns resemble a small gull in size and shape (especially black-billed gull, which may hawk insects in flight). Gull-billed terns in flight do not have black-and-white wing-tip pattern of gulls, and also have a much heavier bill, and more pointed wings.

The Australian-breeding subspecies macrotarsa is the form known to occur in New Zealand. It has a long, heavy bill that may appear to droop slightly as it is curved along the top. The eye patch in nonbreeding birds is large, extending to the ear and well below the eye. The Asian subspecies affinis (not yet identified in New Zealand) is smaller, and has a short straight bill sharpening abruptly at the tip. In nonbreeding plumage they have a white eyelid and much smaller eye patch that is often separated from the small ear patch (or may be joined to it by a thin line). A less obvious difference from the larger subspecies is the slightly darker back, which contrasts more with the white rump.

In Australia, gull-billed terns prefer shallow, often temporary, areas of freshwater, but they are also found on sheltered coastal waters especially during dry periods. They feed over water or surrounding grassland. In New Zealand they are usually found on harbours and estuaries but sometimes on coastal lakes and farmland.

The first gull-billed terns noticed in New Zealand were two found at the Invercargill airport during the winter of 1955. Since then they have occurred reasonably frequently with one or two reported somewhere around New Zealand in most years, especially since the 1970s. Birds that arrive often appear to remain in New Zealand for a year or more. One notable long stayer in Hawkes Bay apparently arrived with a second bird in 1982 and was recorded annually up to 1996.  Larger groups included eight on the Manukau Harbour in 1976-77, five at Marahau near Motueka in 1990, and six on the Kaipara Harbour in 2001. The largest influx yet recorded started in June 2011 with up to six birds seen on the Manawatu estuary, up to 16 on the Manukau Harbour, up to 15 on Lake Forsyth and Lake Ellesmere, and five on Lake Wairarapa, with 1-2 birds seen at many other sites. The timing of these sightings differed, suggesting that the same birds moved about the country over two years but probably at least 20 birds were in New Zealand, and a few were still present until at least 2017.

In New Zealand, gull-billed terns mainly use coastal habitats. They roost in flocks (when multiple birds are present), often with, or near, flocks of roosting waders, gulls and terns. They may feed in loose flocks too. They fly easily, swooping with great precision to pick up food from the surface of the ground or mudflats, occasionally landing briefly to do so. Birds on the Manukau Harbour made shallow dives to take crabs under shallow water. They also hawk insects on the wing.

A variety of animal prey is taken, with invertebrates (including worms, and a variety of insects and crustaceans), fish and small terrestrial vertebrates such as lizards and mice recorded in Australia. In New Zealand they commonly eat crabs taken from the mudflats or in shallow water, also worms and other invertebrates taken from ploughed land and on pasture, and redpolls caught from winter flocks.

A large heavily built tern with mainly white plumage, pale grey back and upper wings, a thick pointed black bill, black eyes, and relatively long dark legs. Breeding adults have a solid black cap from the base of the bill to below the eye and well down the nape; non-breeding adults have a large black eye patch and the crown and nape are lightly streaked or washed with grey.