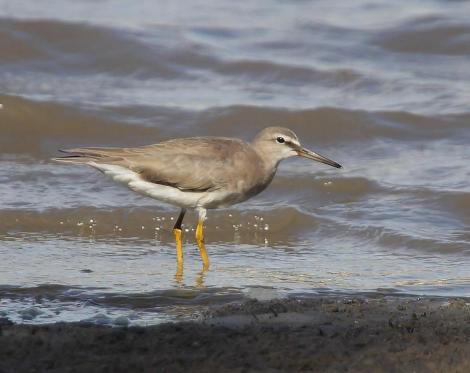 The grey-tailed tattler is a medium-sized, straight-billed wader with grey upperparts and white underbody with narrow grey barring on the breast and flanks. Non-breeding plumage is similar, but with plainer underparts with much reduced barring. A white eyebrow stripe extends beyond the eye and contrasts with a dark loral stripe which also continues a little behind the eye. The dark bill grades into dull yellow towards the base, there is a narrow white eye-ring, and the legs are yellow and of medium length. The long wings and tail give an attenuated rear end, adding to the elegant profile. Alert birds often display bobbing movements.

Voice: an upslurred whistle of two (usually) or three notes.

Grey-tailed tattlers breed in Siberia and migrate south to south-east China, south-east Asia and some of the Pacific islands including New Guinea, Micronesia, Fiji and Tuvalu. They are common in Australia, particularly in the north.

The grey-tailed tattler is a rare but regular visitor to New Zealand, occurring on estuaries, harbours and saltmarshes from Parengarenga Harbour in the north to Awarua Bay in the south. There are many records from the Auckland region, particularly Mangawhai, Kaipara and Manukau Harbours, also Miranda, Waiongana Estuary (New Plymouth), Manawatu Estuary and Ahuriri Estuary (Napier). Most South Island records are from the Nelson region (including Farewell Spit, Motueka and Waimea Inlets) and Kaikoura, also Ashley River mouth, Lake Ellesmere and Southland. Vagrants have occurred on the Kermadec, Chatham, Snares and Auckland Islands, including three on Enderby Island in April 1980, and two there in March 1982.

Grey-tailed tattlers feed by probing around rocks and rubble, or along the edge of water or on mudflats. They consume polychaete worms, molluscs, crustaceans, insects and occasionally fish . They may take several minutes dropping and throwing crabs to remove legs before consumption.