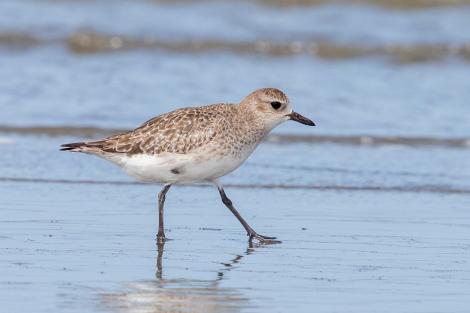 Plovers are small to large waders with typically short bills and relatively long legs. Some are migratory, others sedentary. The grey plover is a medium-sized plover, and the largest outside the genus Vanellus (the lapwings). It is migratory and the most cosmopolitan plover.

The grey plover is a vagrant to New Zealand, with usually a handful recorded each summer at coastal sites.

The grey plover is a plump wader with relatively long dark legs and a short, stout, straight black bill. The back and crown are spangled grey, as are the upper wings, which also possess a white wing bar. The rump, undertail and vent are white. The tail is barred. In breeding plumage the grey plover has a black belly and chest with black extending up to the eyes. The black is surrounded by a white margin, which is thick on the face and chest, but thin on the belly. In non-breeding plumage the belly, chest and face are mottled grey, and there is a broad, but faint supercilium. The plumage may show a slight yellow tinge. The most characteristic features when seen in flight are the black ‘armpits’ (axillaries). The flight is fast with rapid wing beats. Grey plovers feed by running and pausing, then picking from the surface or just beneath.

Similar species: the three golden plover species are similar in size, but are much more colourful, although in dull light may look similar in colour. However, these species are slightly smaller and more slender, have grey or white (not black) axillaries, and do not have the white rump and wing bar of grey plover. Non-breeding New Zealand dotterel may appear similar but is smaller, has ‘scaley’ rather than spangled back plumage, shorter legs, and does not have the grey plover’s white rump or black axillaries.

The grey plover breeds in northern Russia, Canada and Alaska, and migrates to the coasts of western Europe, Africa, including Madagascar, southern Asia, Australia, and America south of the Canadian border. It is found at coastal sites in New Zealand, in particular Farewell Spit. It stays predominantly on the coast feeding on intertidal mudflats and roosting on shellbanks and sandspits, but in Europe it also occurs at inland pools and occasionally on farmland with golden plover.

The grey plover has a world population of about 692,000 birds, with about an estimated 12,000 migrating to Australia.

Typically fewer than five grey plovers are recorded in New Zealand each summer, with Farewell Spit being the most regular site. The first New Zealand record was from the Firth of Thames in 1948. Other sites have included Parengarenga Harbour, Kaipara Harbour, Manukau Harbour, Maketu, Manawatu estuary, Waimea Inlet, Lake Grassmere (Marlborough), Christchurch, Warrington and Awarua Bay. Grey plover have also been recorded twice each from both the Kermadec and Chatham Islands. The largest flock in New Zealand was 12 at Farewell Spit in 1994.

The grey plover breeds in low tundra in the high Arctic. It is monogamous; a clutch of 4 eggs is laid in a shallow gravel scrape.

Grey plovers sometimes associate with other waders, and if in the company of golden plovers are easy to distinguish.

Outside the breeding season grey plover eat small crustaceans, marine worms and molluscs, occasionally insects and earthworms, obtained by probing and gleaning. During the breeding season the diet is predominantly adult and larval insects. They feed during the day, and also at night.

A medium-sized plover with long dark legs and a short stout straight black bill in which adults in breeding plumage have black running from the face down the throat to the belly, a white crown and nape, and a black-and-white spangled back and upper wings. Non-breeding birds have a mottled grey belly, breast and face, and a broad faint supercilium.