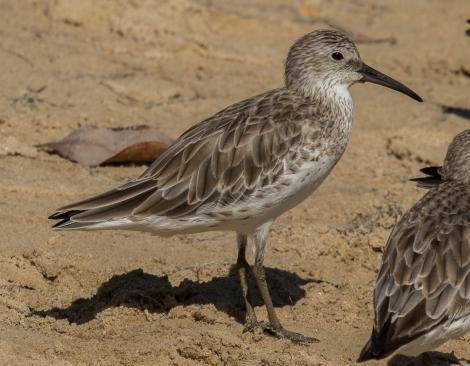 The great knot is intermediate in size between a lesser knot and a small bar-tailed godwit. Its key identification characters are a slightly thick, tapering bill that is noticeably longer than the head, a finely streaked rather than clean supercilium (eyebrow stripe), dense streaking on the forehead, a dark-spotted breast, distinct 'vee' markings along the flanks, and in flight, a whitish rump. In non-breeding plumage, the upperpart feathers have slightly darker centres than those of lesser knots, so their backs appear more varied in tone. In breeding plumage their breasts become blackish, the flank 'vees' more prominent, and the plain mantle and scapular feathers of the upperparts are replaced by bold black-and-red feathering, initially with broad grey fringes that wear off over time. A pale wingbar on the upperwing is shorter than that of lesser knot. Juveniles have white-fringed or -notched upperpart feathers with darkish centres, and only a lightly streaked breast. Most of these distinctive upperpart feathers may be replaced by non-breeding plumage before any such juveniles reach New Zealand.

Voice: generally silent. A bird at the Manawatu estuary was video recorded giving a ‘kreep’ call while with lesser knots. [Video of bird calling at Manawatu estuary: https://www.youtube.com/watch?v=IB9JlOkq3Xc.]

Similar species: great knots can be overlooked amongst flocks of lesser knots in New Zealand, but given good views can be told by breast pattern, head pattern and bill size, and rump colour.

Great knots breed on rocky mountains across a broad swath of north-eastern Siberia. They migrate to non-breeding grounds from the Middle East to Australia, where they frequent large intertidal areas for feeding and adjacent beaches for roosting.

The world population of great knots is about 290,000 birds, down from earlier estimates of 380,000. In New Zealand, singles or small numbers occur regularly, and have been recorded from the Kaipara Harbour to Lake Ellesmere. Birds are frequently recorded from the Manawatu estuary, though whether that is due to great knots favouring the site or birds being more readily observed there is not clear.

Great knots migrate in long flights from the non-breeding grounds to Asia, where they congregate in groups of up to 50,000 at key sites around the Yellow Sea. One such site, Saemangeum in South Korea, was enclosed by a large dyke for reclamation in 2006; monitoring documented a 93% decline from 2006-2011. In total it is estimated that 104,000 great knots were lost from 2006-2013. It is likely that this single reclamation caused a drop of a quarter of the world population of this species.

Great knots breed as monogamous pairs at low densities in mountain tundra in rocky areas. The clutch of 4 eggs is laid in a lichen-lined depression on the ground. Incubation is shared but females leave the males to raise the chicks. Young leave the nest soon after hatching.