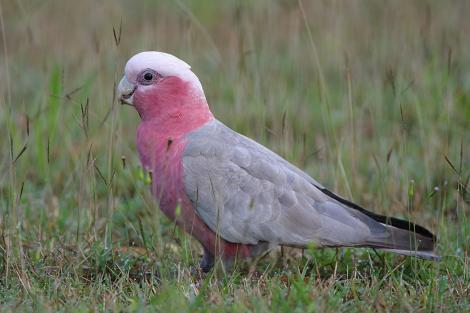 Galahs are medium-sized grey-and-pink parrots. The first record of galahs in New Zealand was from Clevedon in 1959, with many records from 1975 on. Galah are localised in distribution, with the only wild population spread widely over the South Auckland area, including a breeding population on Ponui Island in the Hauraki Gulf. They mainly feed on the ground, eating seeds of grasses, herbs and crops. The largest flocks recorded in New Zealand were feeding on maize stubble.

Galahs are small cockatoos, with a slim frame and narrow wings suitable for fast and agile flight. Feathers on the back, tail and dorsal surface of the wings are grey, darker at the tips of the flight feathers of the wings and tail. The neck, breast, and underside of the wings are bright pink to almost red. The short crest is normally laid back appearing as a pale cap. The beak is pale grey. The iris is brown in males and red in females. Juveniles have duller plumage, with pink areas suffused with grey. Galah are gregarious, with large unstable flocks made up of pairs and small social groups that congregate to feed and roost.

Voice: a distinctive high pitched call described as “chill chill” given in flight.

There is no similar species in New Zealand.

Galahs are widespread throughout Australia. The New Zealand population covers an area from Wellsford south to Mangatawhiri and west to Pukekohe. Their stronghold is Ponui Island in the Hauraki Gulf, and they range to nearby islands as far north as Rakino Island and Tiritiri Matangi, including the eastern end of Waiheke Island. Historical records from the Manawatu and Rangitikei Districts reportedly followed the release of cage birds from a ship that grounded off the coast. This population no longer exists. Free-ranging pets and cage escapes occur elsewhere.

In Australia, galahs mainly occur in open habitats, and are often seen in agricultural grassland and among crops. The few published records from New Zealand are from rolling hill country, with cropping interspersed with extensive pastoral farming and native and exotic forest.

Galahs are uncommon and localised in New Zealand, with probably fewer than 100 individuals present. A flock of up to 50 birds formerly occurred on Ponui Island, but is currently less than half this size. The population is probably limited by live-capture for the pet trade

In Australia, galahs nest in tree cavities, laying clutches of 2-8 eggs. Large clutches may be the result of two females laying in the same nest. Both parents incubate the eggs and raise the chicks.

Galahs are gregarious forming large flocks that, in Australia, may constitute thousands of individuals. They are fast and agile fliers and may range over a large area. The little recorded information on this species in New Zealand suggests their preferred habitat is farmland and exotic forestry. Their range encompasses the extensive native and exotic forests of the Hunua Range, through to the intensive arable areas south of Auckland and the extremely diverse vegetation around Auckland city.

Galahs usually forage on the ground, eating seeds and rhizomes of pasture grasses and herbs. To a much lesser extent they also forage in trees. In New Zealand they have been recorded in exotic tree plantations, but there are no details of food species or parts of plants consumed.

A small cockatoo with bright pink neck, breast and underwings, a short pale pink crest that rises from the crown, pale grey back, tail and upperwings that are darker at the tips of the flight feathers and tail, and a pale grey hooked bill. Males have brown irises and females red; juveniles have pink plumage suffused with grey.