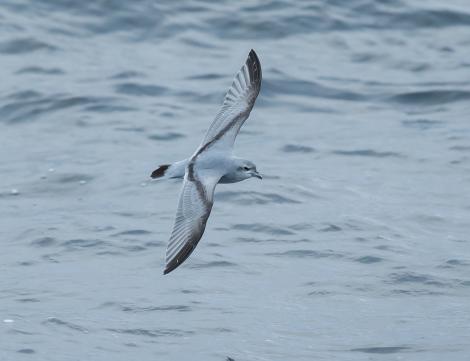 The fulmar prion is a poorly known species that is only easily seen by visiting its remote island breeding sites. It is usually only identifiable in the hand. The species is very similar to the abundant fairy prion but is separable on the basis of its chunkier bill. The specific name crassirostris means ‘thick billed’ in Latin. The fulmar prion breeds only at five southern island groups. Like most petrels it spends most of its life at sea, but its pelagic distribution is poorly known.

Prions are small petrels. The fulmar prion, like other prions, is blue-grey above with a black 'M' marking between the wing tips, a black tail tip and a white supercilium. Underneath it is largely white. Its bill is mainly bluish-grey; its legs and feet are blue with paler webs and greyer claws. Immatures appear similar.

Voice: the fulmar prion is a noisy bird at the nesting colonies both in flight and on the ground, with males giving a four-note call described as what-not-to do and females giving a more slurred, cooing three note call coore-corr-corr . Unlike other prion species, fulmar prions on the Bounty Islands are vocal by day but silent at night.

Similar species: the fulmar prion is separable from most other prion species by its relatively small body and bill size and its more pronounced black tail tip. However it shares these characteristics with the fairy prion and can usually only be separated from this species in the hand on the basis of its more robust bill and slightly darker tail tip.

The nominate subspecies nests at the Bounty Islands and The Snares (Rima and Toru in the Western Chain); the Chatham Islands subspecies nests on The Pyramid and the Forty-Fours; the lesser fulmar prion nests at the Auckland Islands (Ewing, Ocean and Rose), Heard Island, and probably McDonald Island.

Fulmar prions are commonly seen offshore from their breeding colonies during the breeding season, and the species may be fairly sedentary around its nesting islands in winter, however little is known about its pelagic range as fulmar prions are difficult to identify at sea. It has been seen in the south Tasman Sea, near Stewart Island, east of the South Island, and well east of the Chatham Islands at 50˚S 156˚W. Fulmar prions rarely reach mainland New Zealand coasts, and are an extreme vagrant to Tasmania.

The fulmar prion is confined to nesting on offshore islands free of introduced predators. There is no evidence to show that the species formerly had a wider nesting range, although fossil remains have been identified from Chatham and Pitt Islands. Many current nesting sites remain vulnerable to invasion by rats which would have the potential to eliminate populations. Serious pollution incidents, such as oil spills, near breeding sites are also a potential threat. Subantarctic skuas kill some birds on the breeding grounds.

Fulmar prions breed in dense to loose concentrations; at several sites they breed among nesting albatrosses. The breeding biology has not been studied in detail but it is assumed to be very similar to that of the closely related fairy prion, with a breeding season from October to February. At the Bounty Islands, partly incubated eggs were found on 19 November. At The Snares, eggs have been found from 13 October to 21 November, hatching peaks in mid December, large downy chicks were seen on 19 January, and fledglings probably leave in early February. At the Chatham islands incubation was underway from early to mid December. At Heard Island, eggs have been found from 23 November to 20 December, with hatching estimated to be in late December to early January, and fledglings departing from 17 February for 1 week.

Nests are normally in natural crevices, rock piles, scree slopes and caves rather than burrows. Like all petrels, only a single egg is laid.

Fulmar prions are unusual among prion species for visiting their nest sites in broad daylight at some colonies (Bounty Islands and The Snares), including performing acrobatic courtship displays and intraspecific fighting on the surface of the colonies. Over the Bounty Islands, flocks will pursue and mob predatory gulls or skuas. However at most colonies (Chatham, Auckland and Heard Islands), fulmar prions are mainly active ashore nocturnally.

Fulmar prions probably catch most of their food close to their breeding islands during the day. They have been seen pecking small items off the sea surface and making brief, shallow dives. Prey consists of a range of small marine invertebrates, varying seasonally, including: crustaceans, juvenile barnacles, salps, pyrosomes, cephalopods and various floating molluscs, and the occasional fish. Chatham Island birds appear to feed mainly on adult barnacles, while birds at The Snares eat mainly crustaceans (euphausiids and amphipods).

Harper, P.C. 1980. The field identification and distribution of the prions (genus Pachyptila), with particular reference to the identification of storm-cast material. Notornis 27: 235-286.

Imber, M.J. 1981. Diets of stormpetrels Pelagodroma and Garrodia and of prions Pachyptila (Procellariiformes). Pp. 63-88 in Cooper, J. (ed.). Proceedings of the Symposium on Birds of the Sea and Shore. African Seabird Group, Cape Town.

A small prion, blue-grey above and mainly white below, with a black 'M' marking between the wing tips, a pronounced black tail tip, white supercilium, and a relatively robust 'chunky' blue-grey bill, and blue legs and feet. In the hand, it is relatively small-bodied and the robust thick bill is mainly bluish-grey.

Pair on the ground