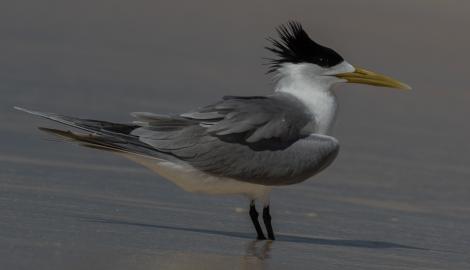 The crested tern is a rare vagrant to New Zealand with 16 records only. The first record was from the Kermadec Islands in 1910. Since the 1960s the species has been reported from Spirits Bay, Waipu, Auckland, Firth of Thames, Maketu, Napier, New Plymouth, Whanganui, Manawatu, Wellington, Farewell Spit, Kaikoura and in Canterbury (off Southshore Spit and at Washdyke Lagoon). One was apparently resident around Wellington from 1981-1995.