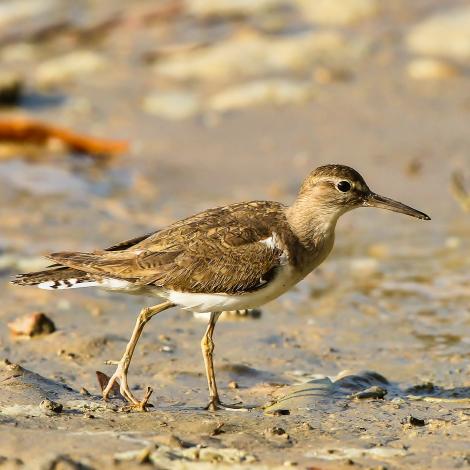 The common sandpiper is a medium-sized member of the sandpiper family and as its name suggests is an abundant species within its Northern Hemisphere breeding range. New Zealand is well south of its usual wintering range and consequently the species is seldom recorded here. It is likely however that many common sandpipers go undetected in this country as they occur in a wide range of wetland habitats, both coastal and inland, and do not favour estuarine mudflats as most migratory waders and therefore birdwatchers do.

The common sandpiper is a medium-sized sandpiper with nondescript dark greyish-brown plumage above and white below. The most distinguishing plumage feature is a white shoulder “tab” which separates the grey breast from the front of the closed wings. This gives the impression that the bird is wearing a bib. Other useful identification features are a white eye-ring, a black eye-stripe, pale eyebrow, and a brownish bill approximately the same length as the head. In flight the upper surface of the wing is brownish with a prominent white wing-bar which extends from the primary feathers into the secondaries and reaches the body. The underwing is mainly white. At rest, the tail extends well beyond the folded wings. The legs are dull greenish-grey.

Voice: the flight call is a distinctive hee-dee-dee.

The common sandpiper breeds across Europe, central and northern Asia east to Japan. Its global population is estimated at over two million birds. During the non-breeding season it is found throughout Europe, sub-Saharan Africa, south and south-eastern Asia, Philippines, New Guinea and Australia. Within the East Asian-Australasian Flyway, the common sandpiper is considered the most widely distributed shorebird species, but the southern limits of its regular migration are the southern coastlines of Australia.

The common sandpiper is a rare visitor to New Zealand. Since the first verified record in 1964 there have been less than eight records per decade, with the vast majority in the North Island. There have been eight South Island records and one sighting on Stewart Island. All records in New Zealand have been of single birds on a range of habitats including tidal riverbanks, braided riverbeds, brackish lagoons and oxidation ponds.

Generally solitary in the non-breeding season, common sandpipers tend to avoid flocks of other waders on estuarine mudflats and high tide roosts. Instead they visit a wide range of freshwater and brackish wetland habitats and a sizeable proportion of those reaching New Zealand no doubt occur at sites (such as riverbanks, rivermouth lagoons and farm ponds) that ornithologists seldom visit. They forage in shallow water and on muddy and stony substrates. They often bob their head and teeter their tail up and down as they walk about, exaggerating this action when they become wary of an approaching human or potential predator.

A medium-sized sandpiper with greyish-brown plumage above and white below, a white shoulder 'tab', white eyerings, a black eye-stripe, pale eyebrows, a brownish straight bill, and dull greenish-grey legs. In flight the upper surface of the wing is brownish with a prominent white wing-bar.