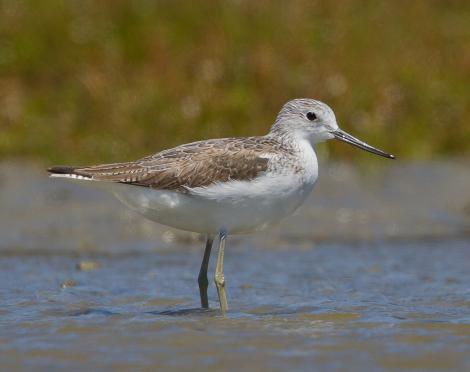 The greenshank is a large, long-legged wader with a broad distribution in most parts of the world other than the Americas, where it is replaced by the greater yellowlegs. It breeds across northern Europe east to Kamchatka, and outside the breeding season can be found throughout sub-Saharan Africa, Asia, Indonesia and Australia. A very few reach New Zealand, where the frequency of sightings has declined greatly in recent decades.

The greenshank is a typical, large sandpiper with long legs and a slightly upturned bill. It has grey-brown upperparts and white underparts, with black streaking on the breast in breeding plumage. In flight a distinctive white V up the back contrasts with the grey-brown wings. The bill is blackish distally, grading into dull grey-green at the base; the legs are light yellowish-green to blue-green. The sexes are alike.

Voice: a sharp tew tew tew given in flight, especially when flushed.

Similar species: in New Zealand the only confusion species are marsh sandpiper and lesser yellowlegs, both of which are also very uncommon. Marsh sandpiper is very similar to greenshank, including the white V up the back, but is smaller and has proportionately longer legs and a much finer bill. Lesser yellowlegs has yellow legs and a square white rump showing in flight.

Greenshanks breed across Eurasia from Northern Scotland to the Russian Far East. In the non-breeding season they have an extensive range in throughout Africa south of the Sahara, Arabia, India, South-East Asia, Indonesia, the Philippines and Australasia, with vagrants to Crozet, Kerguelen and Macquarie Islands. It is an occasional non-breeding visitor to New Zealand.

Greenshanks breed in taiga and tundra. In the non-breeding season they mostly occur in coastal estuarine habitats, but also inland on lakes and large rivers.

The population of the East Asian-Australasian Flyway is estimated at 100,000 birds. They are less common in New Zealand than formerly. Up to six were recorded annually during OSNZ wader surveys in the late 1980s and early 1990s but none was recorded during the counts in the period 1994-2003 (although there were accepted records of birds in 1998 and 2002 that were missed during the surveys). The seven accepted records since were at Porirua Harbour (October 2004), Unahi, Northland (March 2007), Kaipara Harbour (February 2011), Lake Ellesmere (October 2012 and September 2013 to February 2014), Manawatu Estuary (January 2013), and Miranda (November 2014). Vagrants have also reached the Chatham Islands (1978), Snares Islands (November-December 1968) and Campbell Island (January-February 1978).

About 35% of the East Asian-Australasian Flyway greenshank population stages in the Yellow Sea on northward migration – an area under severe threat from reclamation and pollution.

Greenshanks lay a clutch of 4 eggs in a shallow scrape, usually lined with a few feathers. Incubation takes 23-26 days; the young are active and leave the nest within a few hours of hatching, and fledge when 25-31 days old.

In New Zealand greenshanks occur at estuarine and brackish lagoon margins, favouring those with saltmarsh and shallow pools, where they often associate with pied stilts.

In the non-breeding season greenshanks mostly eat crustaceans, small fish, and worms. They sometimes feed by running through shallow water to catch shrimps and fish.

http://www.greenshank.info/schools/all_about_greenshanks.html [although a UK website it has a useful migration game for children]

A large sandpiper with long legs, a slightly upturned bill, round black eyes, grey-brown upperparts, white underparts, and black streaking on the breast in breeding plumage. The bill is blackish with dull grey-green at the base and the long legs are light yellowish-green to blue-green.